Top 10 reasons why you should eat organic foods 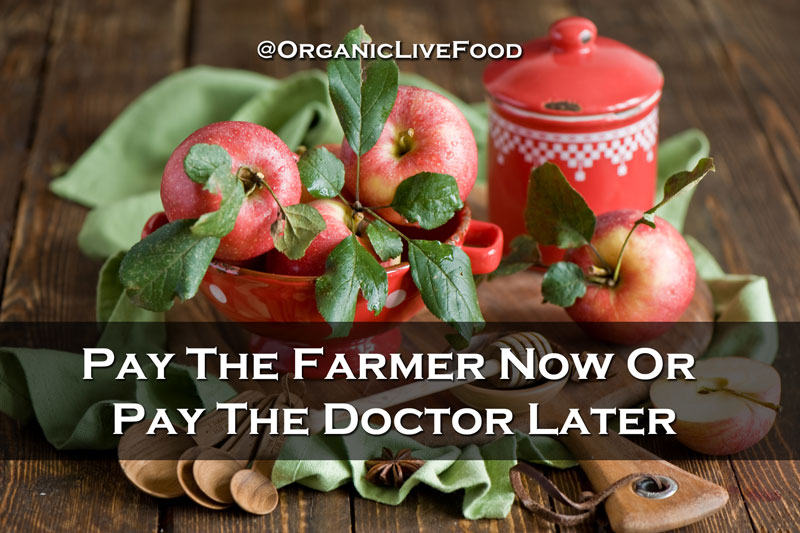 Eating organic foods can have many health benefits in comparisons to eating GMOs or pesticide ridden foods. Unlike natural foods, organic foods have significantly lower levels of pesticides, herbicides, chemicals and other toxins. Organic farming prohibits the use of chemicals and pesticides, antibiotics, and rBGH/rBST growth hormones in meat and dairy products.

Keep in mind that on average Americans are exposed to 13 different pesticides in foods and drinks on a daily basis. Most of these pesticides are endocrine-disrupting chemicals that can interfere with the body’s hormonal and metabolic system and lead to many health issues including obesity and diabetes.

Keep in mind that most pesticides used in agriculture are known as ‘systemic pesticides’ and they don’t only exist on the plants’ exterior but also in the interior. You cannot wash systemic pesticides since they are penetrating deep within the plants’ tissues. The four main groups of systemic pesticides are known as Imidacloprid, Thiamethoxam, Clothianidin and Dinotefuran. These pesticides are a part of nitroguanidine and neonicotinoid group of chemicals linked to neurological issues such as Alzheimer’s and Parkinson’s disease. Neonicotinoids widely used in GMO crops are a known neurotoxin linked to nervous system issues and colony collapse of bees.

Here are the top 10 reasons why you should mostly eat organic:

Organic foods have higher level of vitamins, minerals and other nutrients such as beta carotene, enzymes, micronutrients, antioxidants, fatty acids and flavonoids. In the last few decades, the unsustainable agricultural practices and the use of chemicals and pesticides have reduced the level of nutrients and trace elements and minerals in our food supply by 75%. The foods we eat no longer have nutritional value that they used to have 50 years ago. However research shows that organic foods still have higher level of nutrients than GMO and pesticides ridden foods. In fact, a research conducted by the Journal of Alternative and Complementary Medicine has summarized the findings of 41 published studies and has concluded that there are significantly more nutrients in organic crops than GMO or pesticides ridden foods. Keep in mind that on average organic foods have 27% more vitamin C, 30% more magnesium, 21% more iron and 14% more phosphorus than their conventional counterparts.

According to researchers at Washington State University, organic foods are higher in antioxidants and lower in nitrates. Organic foods have also better taste since they are grown in harmony with Mother Nature. In fact, organic strawberries taste sweeter than conventional ones.

2. Organic foods have lower level of chemicals, pesticides, hormones, and other toxins

Some people might argue that organic foods are also contaminated or are even the same as pesticide ridden foods. There are no doubts that most foods, even our air, soil and drinking water are polluted and have contaminates in them. But organic foods have definitely lower level of pollution or contaminates. In fact, researchers suggest that eating organic foods can lower the level of pesticides by 89%. According to researchers those who eat conventional diet have higher levels of dialkylphosphates (DAPs), and organophosphate in their blood. Keep in mind that more than 73 million pounds of organophosphate are used annually on US crops. Organophosphate is a known neurotoxin linked to many health issues and neurological problems such as Parkinson’s, Alzheimer’s disease, infertility and leukemia. Research shows that 89% of non-organic apples in US are contaminated with a toxic carcinogen known as diphenylamine banned by EU.

Beside toxic chemicals and pesticides, organic farming also prohibits the use of antibiotics and bovine growth hormones used in livestock. Growth hormones have been linked to early puberty, obesity and breast/prostate cancer.

3. Organic foods don’t have additives or preservatives linked to many health issues

Most non-organic foods are filled with toxic additives and preservatives such as hydrogenated fats, monosodium glutamate (MSG, hidden under 41 different names), high fructose corn syrup (HFCS), artificial colorings and sweeteners such as aspartame or sucralose. Organic farming prohibits the use of toxic additives and preservatives linked to many health issues such as obesity, heart disease, cancer, diabetes, leukemia and allergies.

4. Eating organic is a great way to avoid GMO foods

In the last few decades, genetically modified foods have found their way into our food supply. GMOs have been linked to many health issues such as cancer, gastrointestinal problems, DNA damage, autism and leaky gut syndrome. Recent reports also suggest that in the last few years, illegal varieties of GMOs have been leaking into our foods supply. Despite the demand of the American public, the giant chemical and pesticide companies have spent billions of dollars to fight GMO labeling movements. In fact, Obama recently signed the Dark Act that would undermine GMO labeling victories in Connecticut and Vermont.  Keep in mind that Monsanto’s BT toxin is found in the blood and urine of 93% of women and their unborn fetuses. Monsanto’s popular weed killer glyphosate is also found in our air, drinking water, breast milk of nursing mothers and blood and urine of chronically sick people. The good news is that GMOs are not allowed in organic products and with biotech anti-GMO labeling policies, eating organic foods is the only way to avoid eating GMO foods.

5. Eating organic foods is an investment towards the health of your family, including your children

As mentioned the use of pesticides, chemicals and toxins in our food supply have been linked to a large number of chronic diseases including autism, allergies, cancer, diabetes, Parkinson and Alzheimer’s. Eating organic foods can significantly benefit your health and the health of your children since the use of many of these chemicals are banned and prohibited in organic farming.

6. Eating organic can help the environment by helping the climate change, preserving our ecosystem, and reducing pollution in the water and soil 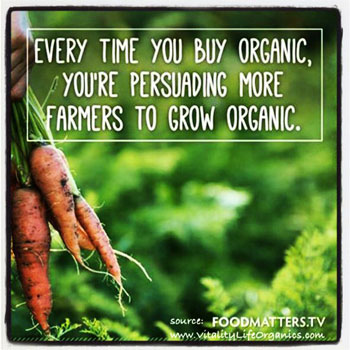 Organic farming is based on sustainable agricultural practices and prohibits the use of chemicals, pesticides and toxins that can affect the beneficial bacteria and nutrients in the soil. Healthy soil and preserving our ecosystem are the two pillars of organic farming. Keep in mind that since the instruction of GMOs, the use of herbicides has increased by 527 million pounds. Biotech companies have promised that GMOs will help to reduce the use of chemicals, but the reality cannot be any further from the truth.

Organic farming is the only way to reduce the level of chemicals and contaminates in our soil and food supply. Organic farming is also good for wildlife as well as the environment since it causes less pollution and lowers the level of carbon dioxide (the main reason behind global warming). Keep in mind that animal agriculture, the use of chemicals and pesticides and factory farming contribute to most of the greenhouse emissions.

Did you know that almost 75% of the world's plant genetic biodiversity are lost in just the last century? Many farmers have also lost more than 90% of their crops’ varieties while six breeds of livestock are lost every single month. More than 80% of world’s food supply is generated from only 12 plants and five animal species.

Most conventional foods are mass produced by using unsustainable agricultural practices and extensive use of chemicals and pesticides. Unlike conventional farming, organic farming respects the importance of having a sustainable and balanced ecosystem. The principals of organic farming are about preserving and protecting the natural inhabitants and well-being of all the species.

As they say ‘pay the farmer now or pay the doctor later’. Buying organic food is a great way to support small family farmers and local producers. Many small farmers have gone bankrupt because of GMO corn subsidies and monopoly polices granted to biotech companies by our government. Only we the consumers can vote for our dollars and support small family farms. Keep on mind that conventional farming is heavily subsidized by our tax dollars and billions of our tax dollars are spend on farm subsidies that profit the giant chemical and biotech companies.

9. Eating organic foods will save you time and money

Paying for organic foods can save you money because there are no hidden costs when you are buying organic. Our tax dollars end up paying for pollution of giant oil companies or chemical runoffs of giant agribusinesses. By hurting our environment we end up hurting ourselves and the chemicals and pesticides of giant agribusinesses do end up in our rivers, lakes, water, soil, and eventually our food. In fact, a study by Cornell University shows that “the cost of a head of commercial iceberg lettuce, typically purchased at 49 cents a head, to be more than $3.00 a head when hidden costs were revealed”.

10. Animal welfare is taken seriously when it comes to organic practices

As mentioned the greenhouse emissions from livestock in the main reason behind rapid climate change. Keep in mind that currently there are 65 billion livestock (with 10 billions of them in US) kept, imprisoned and tortured in confined animal feeding operations (known as CAFOs).

Organic farming prohibits unsustainable agricultural practices of conventional farming. Organic farming is against animal crudity and policies of giant agribusinesses like Tyson Foods. Animal brutality is bad for our health and the environment.  Find out how the truth about factory farming is too hard to swallow.

Both animal health and welfare are taken seriously when it comes to organic farming. In organic farming, animals are not allowed to be caged and have access to outdoors and graze on green grass instead of Monsanto’s GMO corn. The practices of organic farming results in having healthier and happier livestock which is good for people’s health and the environment.