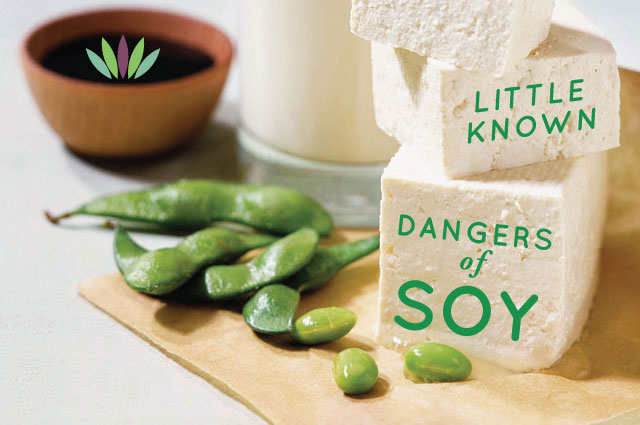 Depending on who you talk to, soy can be described as being wonderful and healthy for you – or a poison that slowly kills your cells without being detected until the harm is done and it is too late to do anything about it.

Rather than prescribing to either of the two, let’s look at the facts and the science to see which of the views, they support.

Soy has been described as having many health benefits, including being high in protein and potassium and low in cholesterol. Soymilk has also been marketed as being a great replacement for milk and substituted in many ingredients that would otherwise use milk.

Soy is from soybeans which are legumes originated in East Asia, but are now being produced on a large scale in the United States. You may ask the question why soy is produced on such a large scale over here since Americans had very little interest in consuming soy or soy products only a century ago.

Well, the answer is: more money.

Large-scale production of soybeans in U.S. continues to expand rapidly. In fact soybeans are the second-most-planted field crop in the United States after corn, with 77.5 million acres planted in 2009. Increased planting flexibility, steadily rising yield improvements from narrow-rowed seeding practices, a greater number of 50-50 corn-soybean rotations, and low production costs (partly due to widespread adoption of herbicide-tolerant varieties of GMOs), have resulted in huge amounts of profit from expansion of soybean acreage and production.

However, producers decided that despite the ease of expansion of this high-yield product they need to increase consumption and consumer reliance on their product. Marketing companies, on behalf of producers, released clever promotional brochures to prove that soy is healthy and nutritious. Additionally, they tried to produce many different uses for soy and now it is included as an ingredient in almost every processed food and canned food on the market.

Producers have spent over $74 billion Dollars with marketing companies in the past few decades advertising and promoting soy and soy products.

Today soy is used to make many different foods. Soybeans can be eaten whole, with the immature types being called edamame. Also, soy is used in tofu, soy sauce, soy milk and various dairy and meat substitutes. It is also used in fermented foods like miso and tempeh.

However, the truth cannot be ignored no matter how much marketing Dollars is allocated to attempt to distract the public from knowing the facts.

Here are the facts:

1. Over 98% of soy produced in the U.S. is genetically modified and the crops are sprayed with the herbicide Monsanto Roundup, which is regarded as a major contributor to serious adverse effects on health, in particular pregnant women, children, elderly, and anyone suffering from a chronic illness or having low immune system.

2. Soybeans must be cooked, as they are poisonous when raw. That’s a fact.

3. Soybeans have been causing serious side effects for babies and many pediatricians and health professionals are eliminating it completely from the diet of babies and young children, and even nursing mothers. Researchers in Sweden concluded that soy formula produced in U.S. consumed by babies are the equivalent hormones of 2-3 birth control pills a day, and hence it was immediately banned in Sweden.

5. Although it is now a known fact that soy foods block calcium and cause Vitamin D deficiencies, it has recently been discovered that consumption of soy foods also increases the body’s need for Vitamin B-12, and magnesium.

6. Soybean contains a gene that allows them to be directly sprayed with herbicides (Monsanto’s Roundup) without dying. However, there is now evidence that this gene can mutate and create a pesticide-like toxin inside the human body, and cause many adverse health effects.

7. Soy production is harmful to the planet. Soybeans strip the soil of many nutrients, leaving soil depleted while farmers resorting to 50-50 corn-soybean rotations to keep up production.

8. Soy production is harmful to livestock who eat it. Livestock that are fed soybeans and soy byproducts have suffered digestive and reproductive disorders. Recently, the first long-term study released on pigs who were fed soymeal showed frightening results. The pigs (worse for female pigs than male) showed server signs of stomach inflammation, increase in hemorrhaging bowels (some bled to death), stomach ulcers, about 25% increase in uteri, carcinoma, and endometriosis.

9. Soy foods and soy-based products have high levels of aluminum and could cause damage to nervous system, kidneys and liver.

10. Soybeans block absorption of essential minerals and vitamins such as calcium and vitamin D and can increase the risk of bone decay and osteoporosis.

But producers of soy and their marketing promoters claim that in Asian countries soy is consumed much more than U.S. and Europe, as it has been for centuries without any major side effects.

Well, I have lived in Asian countries for few years. Soy based foods are consumed not as much as Westerners believe, and certainly not as a main dish. Additionally, they consume seaweed (with lots of Vitamin K) and traditionally made broths (which has lots of calcium), both of which have high nutrient concentration and can help offset the harmful effects of soy consumption, and until a decade ago they did not produce soy with Roundup herbicides. In the Western countries, we are not that lucky.

What research studies say about Soy: 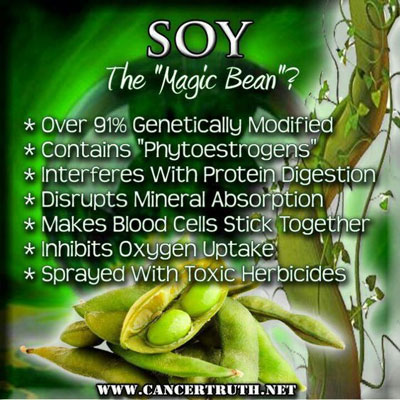 1. Scientific research study has shown that the developing male fetus, in pregnant women, which is exposed to soy phytoestrogens may suffer from higher susceptibility to prostate cancer later in life.

2. A 1991 study found that eating only 2 TBL/day of roasted and pickled soybeans (like edemame) for 3 months to healthy adults who were receiving adequate iodine in their diet caused thyroid suppression with symptoms of malaise, constipation, sleepiness, and goiters.

3. The American Journal of Clinical Nutrition published a study about six premenopausal women with normal menstrual cycles were given 45 mg of soy isoflavones (a chemical found in soy) per day. This is equivalent to only 1 cup of soy milk or 1/2 cup of soy flour. After only one month, all of the women experienced delayed menstruation with the effects similar to tamoxifen, the anti-estrogen drug given to women with breast cancer. This was quite alarming when it was discovered.

4. Proceedings of the Society for Experimental Biology and Medicine published study regarding dietary estrogens in the form of soy foods were found to have the potential to disrupt the endocrine system with the effects in women similar to taking the breast cancer drug tamoxifen.

5. The Annals of Pharmacotherapy published a study on how soy isoflavones appears to stimulate existing breast cancer growth indicating risk in consuming soy products if a woman has breast cancer.

6. According to Environmental Health Perspective, female newborns who are orally exposed to soy phytoestrogen, experienced harm to the reproductive system in the form of delayed vaginal opening, abnormal estrous cycles, decreased fertility, and delayed parturition.

7. In 1996, researchers found that women consuming soy protein isolate had an increased incidence of epithelial hyperplasia, a condition that presages malignancies for breast cancer.

8. The fatty acids in soybeans are mostly Omega-6 polyunsaturated fats. This causes in-balance between Omega-3 to Omega-6 ratio in our bodies. Too many Omega-6s in the diet can lead to inflammation and all sorts of health issues including cancer.

9. Soy (in particular phytates) blocks our body’s absorption of nutrients including vitamins and minerals.

10. According to researchers, soy and soy-based products have enzyme inhibitors that could interfere with protein digestion and lead to nutritional deficiencies. Keep in mind that soy could cause vitamin B12 deficiency, in particular in vegetarians who rely on soy as a main source of protein.

Almost all canned foods contain soy and even some canned tuna contains a soy protein as part of the broth. Many of products that your favorite restaurants (especially fast-food restaurants) contain high amounts of soy and soy byproducts.

In order to stay healthy and avoid many chronic diseases, consider eliminating or dramatically reducing the intake of soy and soy products from your diet.