A world without bees; the impact of neonicotinoid insecticides on your health and the population of bees

Neonicotinoid pesticides (known as acetamiprid, thiamethoxam, and imidacloprid) are known to be toxic and even lethal to honeybees, bumblebees, birds, lady bugs, and butterflies. The residue of neonicotinoids found in pollen or nectar of plants is consumed by pollinators such as bees or butterflies. Neonicotinoids can stay in the soil for up to 6 years after the application. So plants that are not treated with neonicotinoids could absorb the chemical residue in the soil from the previous years.

Neonicotinoids have been linked to auto immune system disorder in bees making them susceptible to parasites or pathogens such as intestinal parasite Nosema. Being susceptible to parasites and pathogens is the main reason behind the sudden disappearance of bees known as ‘colony collapse of bees’ or CCD. Since 2006, the beekeepers in US have lost more than 10 million beehives and more than 2 billion dollars in profit.

What do researchers say about neonicotinoid and colony collapse of bees? 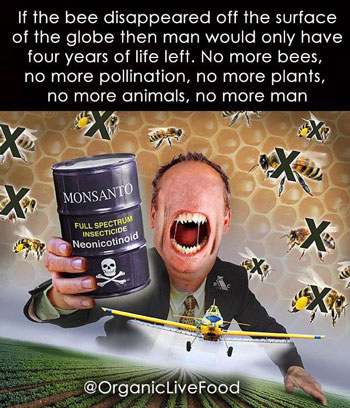 According to a study published in the Proceedings of the National Academy of Sciences, neonicotinoid and clothianidin pesticides are responsible for CCD. According to researchers, neonicotinoid insecticide clothianidin can increase the level of a protein in bees that negatively affect their immune system by making them more vulnerable to pathogens and harmful viruses.

According to the leading author of the study ‘the neonicotinoid insecticide clothianidin negatively modulates NF-κB immune signaling in insects and adversely affect honey bee antiviral defenses controlled by this transcription factor. Exposure to clothianidin, by enhancing the transcription of the gene encoding this inhibitor, reduces immune defenses and promotes the replication of the deformed wing virus in honey bees bearing covert infections. This honey bee immune suppression is similarly induced by a different neonicotinoid, imidacloprid, but not by the organophosphate chlorpyriphos, which does not affect NF-κB signaling’.

In another research published in the journal of Ecotoxicology, the UK researchers found out that bees exposed to neonicotinoids could not find enough pollen depriving their young ones from the only source of protein. According to researchers, ‘Pollen is the only source of protein that bees have, and it is vital for rearing their young. Collecting it is fiddly, slow work for the bees and intoxicated bees become much worse at it. Without much pollen, nests will inevitably struggle’.

Researchers also suggest that neonicotinoids can block the nerve endings of the bees and negatively affect their navigating senses to get back to their nests. Because of the damage to their nervous system, bees get paralyzed and cannot move and will starve to death.

Neonicotinoid are toxic to our health, as well as bees, birds and butterflies:

According to researchers at European Food Safety Authority (EFSA), neonicotinoids could adversely affect the development of neurons and brain neural structures of people associated with functions such as learning and memory. Scientists suggest that lab rats who were exposed to imidacloprid class of neonicotinoids suffered from reproductive failure, weight loss, and brain damage.

According to another research by The Xerces Society for Invertebrate Conservation, neonicotinoids are negatively impacting bees, as well as other pollinators such as beneficial insects in the soil, lady bugs, butterflies, and even birds.

Other research by European Food Safety Authority (EFSA), indicate that neonicotinoids are toxic to bees and wildlife. A few years ago, in Canada Ontario, more than 37 million bees dropped dead after GMO corn fields were treated with neonicotinoids. Christy Morrissey, a biologist from University of Saskatchewan says that the use of neonicotinoids is increasing in Canada and the neurotoxin is having a negative impact on wildlife such as insects and birds.

‘The impact on biodiversity could be probably bigger than we've ever seen before” says Christy Morrissey. According to Morrissey, neonicotinoids could stay in the soil for a long time and in many farm fields in Canada, neonicotinoids have been detected in the soil or water. According to Morrissey “Neonics are very likely to be devastating to insects, since they are persisting in the water for months and in some cases years. The longer that the chemical is in the water the longer the exposure time for the bugs. So they basically are being hit continuously with the chemical."

While neonicotinoids are contaminating our food and drinking water, the US wildlife and Fish service bans neonicotinoids from wildlife refuges. “On the issue of the use of neonicotinoid insecticides, we have determined that prophylactic use, such as a seed treatment, of the neonicotinoid pesticides that can distribute systemically in a plant and can potentially affect a broad spectrum of non-target species is not consistent with Service policy. We make this decision based on a precautionary approach to our wildlife management practices and not on agricultural practices” says the Chief of National Wildlife Refuge System James Kurth.

After 20 years of denial and lawsuits, EPA finally admits that neonicotinoids are a potent neurotoxin: 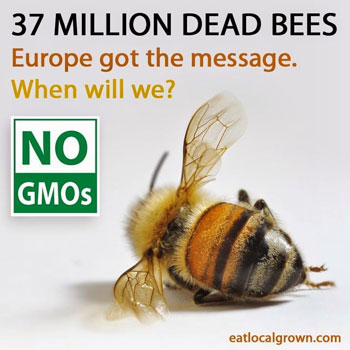 While the European Union including Germany, France and Italy have banned neonicotinoids, EPA and the US Department of Agriculture have failed to ban the use of the neurotoxin in US. France has zero policy towards carcinogens and gets it when it comes to the toxicity of pesticides. And despite all the pressure from the manufactures of neonicotinoids (Bayer CropScience and Syngenta), the French government continue the ban on neonics.

Despite the toxicity neonicotinoids, more than 94% of US corn and soy are treated with either imidacloprid or clothianidin class of neonicotinoids.

For more than a decade, EPA has been under pressure from the environmentalists and beekeepers to ban neonics. In the last few years, EPA has even been slapped with lawsuits over failure to ban neonics.

In recent years, bees have been dying in such high record numbers that even EPA admits that neonics are a potent neurotoxinand are linked to colony collapse of bees.

For more than 20 years, EPA has been well-aware of mounting research and evidence on the negative impact of neonicotinoids, but has refused to take any regulatory action:

It’s shameful that the corporate influence has been trying to undermine the toxicity of neonics under FDA and EPA’s watch. More than 87% of plants, fruits and vegetables including apples, almonds, onions, cherries, avocados, and oranges are pollinated by bees. In 2006, US beekeepers have lost more than 90% of their hives, and many farmers including California almond growers had to import bee colonies from outside the country.

Obviously the profit of few giant corporations like Bayer Crop Science or Syngenta is more important than the sustainability and biodiversity of our food supply. These corporations have deep pockets to hire lobbyists who bribe governmental agencies and members of congress to accept and even promote mass chemical poisoning.

It is up to us, the consumers to fight against the tyranny of biotech industry and exploitation of our natural resources like our food system. If bees go, we go. EPA has been 20 years late in admitting that neonics are toxic. ‘Ban the use of Neonicotinoids, it’s that simple’. If bees go, we go.