Did you know that a Glass of milk can have up to 20 different chemicals, antibiotics and hormones?

According to researchers, there can be up to 20 synthetic chemicals, painkillers, antibiotics and growth hormones in one glass of milk. One of these chemicals happens to be the main ingredient in Monsanto’s top selling herbicide known as ‘glyphosate’.

According to a study published at the Journal of Environmental & Analytical Toxicology, all cows tested at a Danish dairy farm had glyphosate in their urine. Glyphosate is known to be toxic to people and dairy cows. In fact, a recent report published by DailyMail shows horrifying birth defects in animal farms fed on GMO corn treated with glyphosate.

According to a research published in the Journal of Agricultural and Food Chemistry, cow, goat, and human breast milk have traces of anti-inflammatory drugs such as mefenamic acid, ketoprofen, diclofenac, phenylbutazone, niflumic acid, naproxen, flunixin, and diclofena. There are other chemicals in milk and dairy products such as hormones (sex hormone oestrogen and 7-beta-estradiol), anti-fungal drugs, steroid, antibiotics, and anti-malaria drugs (pyrimethamine).

The giant dairy industry drugs up the cows on a regular basis: 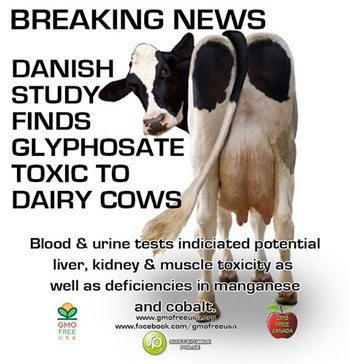 The bovine growth hormones widely banned by EU and the rest of the civilized world have serious health impact on people and livestock. Bovine growth hormones have been linked to a wide range of health issues such as obesity, early puberty in girls and boys, and breast, and prostate cancer.

According to researchers, dairy milk from cows treated with rBGH/rBST hormones have higher levels of IGF-1 linked to breast, prostate and colorectal cancer. Bovine growth hormones have been linked to other health issues such as diabetes, nausea, headaches, and blurry vision.

Keep in mind that organic dairy products are far better than conventional ones (the use of growth hormones are prohibited in organic farming), but pasteurization still destroys vitamin C, useful enzymes, nutrients, and protein in the milk and alters them into a form of amino acids that body cannot fully digest. Pasteurization also destroys beneficial bacteria in the milk and transforms (lactose) into beta-lactose increasing the risk of lactose intolerance.

Despite the wrath of FDA against raw milk, high quality raw milk is a lot better for health:

High quality raw milk is much better option if you are able to find a local supplier of raw organic milk. Although FDA continues to wage its war against raw milk farmers and dairy producers, many small farms still choose to provide raw milk for customers.

Keep in mind that FDA and other governmental agencies have been helping and funding organized armed governmental raids against producers of raw milk and organic products. Here is the footage of FDA organized armed raid against Rawsome store in California back in 2011: https://www.youtube.com/watch?v=ifvp3Fxi7Uo. The footage shows that the law enforcement officers destroyed all the fresh produce and poured the raw milk down the drain.

Few years ago, the Federal government also shut down an Amish farm for selling fresh milk. FDA’s war against raw milk is against the most peaceful communities around us.

Our food, soil, air, and drinking water have been turned into a cocktail of chemicals, yet FDA is busy raiding organic farms:

According to researchers from Portsmouth University, even fish is contaminated with anti-depressant drugs such as Prozac. The researchers suggest that Prozac can change the brain chemistry of the fish and make them behave strangely.

According to a research performed by Moms Across America and Sustainable Pulse, the world’s number one herbicide ‘Roundup’ is now found in the breast milk of women across US. In fact, research shows that the water levels in US have 7,000 more glyphosate than the amount allowed in Europe for animal organ damage.

Keep in mind that although America makes up for the 5% of the world population, Americans consume more than 75% of the world’s pharmaceutical drugs. In US, there are about 250 million prescriptions filled every single year.

So what are FDA, members of congress and other federal agencies doing about the mass chemical poisoning? Absolutely NOTHING, since they are busy organizing and funding governmental raids against organic farmers and raw milk producers. As they say ‘Hood health makes sense, but it does not make money’.