How red meat and processed meat can cause cancer

Research shows that the global demand for meat consumption is increasing drastically and Americans are consuming more meat than before. According to the U.S. Department of Agriculture, an average American consumes 71.2 pounds of red meat (beef, veal, pork, and lamb) and 54.1 pounds of poultry (chicken and turkey) annually.

The recent studies and research have suggested that high consumption of red and processed meat can lead into many chronic diseases, but despite all the research only 5% of the US population are vegetarians.

High consumption of poultry or red/processed meat isn’t good for our health as well as the environment:

Currently there are more than 65 billion livestock (including chickens, cows and pigs) imprisoned and tortured in confined animal feeding operations (known as CAFOs). A recent report by the Food and Agriculture Organization of the United Nations (FAO) shows that the greenhouse emission from billions of livestock in captivity is 70 times more damaging to the environment than the emission of CO2 from cars or factories.

At the same time, according to a report by World Health Organization, the Global cancer rates are expected to increase 50 percent to 15 million new cases by the year 2020.

Other recent studies have indicated that high consumption of animal products like meat, dairy, egg and poultry can increase the risk of various cancers. According to the International Agency for Research on Cancer (IARC), red meat is classified as a probable carcinogen leading to different types of cancer.

A recent study published in the British Medical Journal suggests that women who eat red meat on a regular basis have an increased risk of developing breast cancer. Another study published by Cancer Prevention Research, indicates that both red and processed meat can significantly increase risk of advanced prostate cancer in men.

According to World Health Organization (WHO), Consumption of processed meat like hot dogs, ham, bacon, sausage, and deli meats can significantly increase the risk of cancer: 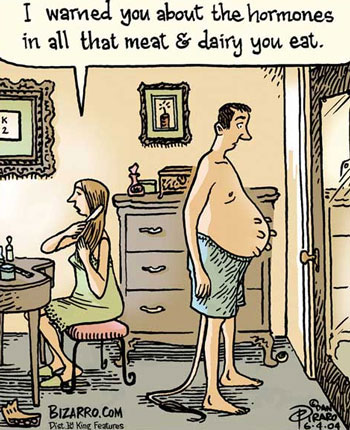 According to the report by WHO, the entire process of preserving and flavoring processed meat that includes salting, curing, fermenting, and smoking is toxic to human’s health. The preservatives in processed meat known as Sodium Nitrate or Nitrite are known cancer causing agents.

In fact, studies suggest that eating one hot dog a day (as well as sausages, salami, bacon, lunch meat and jerky) can increase the risk of colorectal cancer by 21%.

The use of synthetic hormones such as Bovine growth hormones (rBGH and rBST), zeranol, trenbolone acetate and melengestrol acetate used in meat have been linked to early puberty and breast cancer.

Keep in mind that the livestock are treated very poorly and are often fed on genetically modified corn or pallets made of chicken poop or stomach of dead or sick cows. In many cases chicken slaughter houses have also been using cleaning agents to cover up the presence of salmonella.

Arsenic is regularly added to the diet of chickens and a report by USDA suggests that there are high level of toxins, drugs and heavy metals like arsenic in beef consumed in US.

Majority of seafood including shrimp and tilapia consumed in US are imported from countries like China or Vietnam that allow the use of high level of antibiotics that are illegal in US. Farmed tilapias imported from China are fed on pig or goose manure and farmed salmon is raised on pallets made from chicken or turkey feces.