Health benefits of turmeric; the golden spice of life

As we all know adding herbs and spices is a great way of adding flavor and nutrition to our diet. The health benefits of the main compound in turmeric known as curcumin has been the subject of over 5600 peer-reviewed journals.

Ancient Chinese, Egyptians, and Persians used herbs and spices like saffron and turmeric for their medicinal benefits all the time. Over the past three decades, the use of herbs and spices in form of supplements has increased drastically. According to World Health Organization, in Africa up to 80% of the people use alternative medicine for their primary health care. In other parts of the world such as Europe, North America and other industrialized regions, over 50% of the population use some kind of alternative medicine.

With the cost of healthcare and pharmaceutical drugs increasing drastically every year, it makes a lot of sense to turn your fridge into a medicinal cabinet.

Turmeric known as golden spice of life happens to be as effective and sometimes even more superior to 14 different pharmaceutical drugs:

According to studies, turmeric can lower the level of bad cholesterol and is a great alternative for cardiovascular drugs. Other studies have also indicated that turmeric could improve the cardio health by reducing the risk of cardiovascular disease. 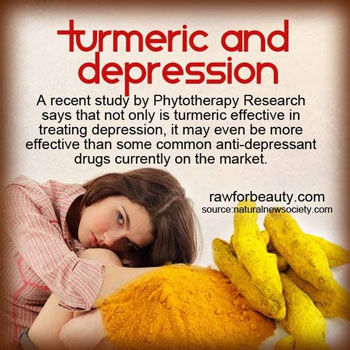 According to research, curcumin in turmeric is superior to drugs used for improving memory and can reduce the risk of dementia and Alzheimer’s disease. According to another study published in the Academy of Neurology, curcumin has a potential role in prevention and treatment of Alzheimer’s disease. “Curcumin as an antioxidant, anti-inflammatory and lipophilic action improves the cognitive functions in patients with AD. A growing body of evidence indicates that oxidative stress, free radicals, beta amyloid, cerebral deregulation caused by bio-metal toxicity and abnormal inflammatory reactions contribute to the key event in Alzheimer's disease pathology. Due to various effects of curcumin, such as decreased Beta-amyloid plaques, delayed degradation of neurons, metal-chelation, anti-inflammatory, antioxidant and decreased microglia formation, the overall memory in patients with AD has improved. This paper reviews the various mechanisms of actions of curcumin in AD and pathology” says the leading author of the study Dr Shrikant Mishra.

According to a study published in the Journal of Breast Cancer Research and Treatment, curcuminin turmeric can effectively reduce the growth of cancer cells. Other researches have also shown that turmeric is every effecting in killing cancer cells. Another study published in the International Journal of Cancer suggests that turmeric is as effective as oxaliplatin for treating colorectal cancer.

Studies have shown that both turmeric and garlic are known to be very effective blood thinners without having side effects of drugs like aspirin. Keep in mind that aspirin can cause gastric ulcers and interfere with vitamin metabolism.

According to researchers, curcumin can to be 500 times to 100,000 times (in the form known as tetrahydrocurcuminoids(THC)) more potent than drug metformin for treating diabetes.

>> Reducing the risk of depression and suicidal thoughts (alternative for antidepressants such as Prozac, Fluoxetine and Imipramine)

A study published in the journal Acta Poloniae Pharmaceutical suggests that curcumin can be as be as effective as anti-depressant drugs without their side effects.

According to a study published in the journal Phytotherapy Research, the main polyphenol in saffron and turmeric could lower the risk of chronic anterior uveitis which is an inflammatory eye disease.

Inflammation can result in many chronic diseases such as cancer or arthritis. According to researchers, primary polyphenol in turmeric can lower the risk of arthritis.

Research has shown that the main polyphenol in turmeric known as curcumin can repair and even regenerate the tissues of lab rats with diabetes.

The powerful antioxidants in turmeric can fight aging, oxidative stress, and free radicals. According to a research published in the journal BioFactors, "Given the long and established history of turmeric as a spice and herbal medicine, its demonstrated chemopreventive and therapeutic potential, and its pharmacological safety in model systems, curcumin, the bioactive extract of turmeric, promises a great future in human clinical studies designed to prevent and/or delay age-related diseases”.

According to studies, curcumin in turmeric can be an alternative therapy in protecting lung transplantation linked to injuries.