When it comes to your health, your zip code matters more than you know

Obesity has become a growing epidemic in the United States. Statistics show that more than 75% of the American adults are obese or overweight while one in three kids born after the year 2000 is obese. Although the obesity rate has been growing drastically, recent statistic shows that adults and children who live in low income communities are a lot more likely to be obese or overweight. 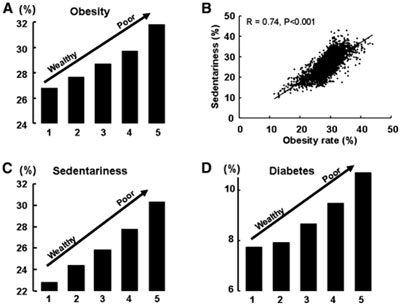 Few studies performed between the year 2003 and 2007 suggest that the obesity rate for children in US has increased by 10% but for children who live in low income communities the obesity rate has increased by 23%. According to researchers, families with lower income are more likely to suffer from stress, anxiety, depression, psychological issues, and other mental disorders.

Keep in mind that stress plays an important role in inducing fat hormone in the body and could significantly lower the metabolic rate and increase cravings for unhealthy foods. Researchers suggest that stress and poor mental health are both directly linked to obesity.

Growing poverty and obesity go hand in hand in America:

After the economic crisis back in 2007, more than 46 million people in US are living in poverty, making the number of poor people greater than it has ever been in the last 50 years. America has also one of the highest rates of childhood poverty compared to other advanced nations. Almost 30 million children in US live below poverty line and more than one million children live on the streets and are homeless.

Statistics show that US counties with poverty rate greater than 35% have 145% greater obesity rate than wealthy counties. According to statistics, those who are less active and have higher BMI are more likely to suffer from metabolic diseases, poor health, diabetes, cardiovascular disease, and even premature death.

According to James A. Levine, the author of Poverty and Obesity in the U.S, “Several reasons may explain why people living in poor counties are less active. One reason may be that violence tracks with poverty, thereby preventing people from being active out-of-doors. Similarly, parks and sports facilities are less available to people living in poor counties, and people who live in poverty-dense regions may be less able to afford gym membership, sports clothing, and/or exercise equipment. There are multiple individual and environmental reasons to explain why poverty-dense counties may be more sedentary and bear greater obesity burdens. What is unknown is whether reversing poverty would reverse sedentariness and obesity. It is an urgent matter to address—both rates of childhood obesity and poverty are concomitantly on the rise”.

In the meantime our politicians continue to subsidize junk foods while obesity-related diseases make up for 70% of the health care costs in US: 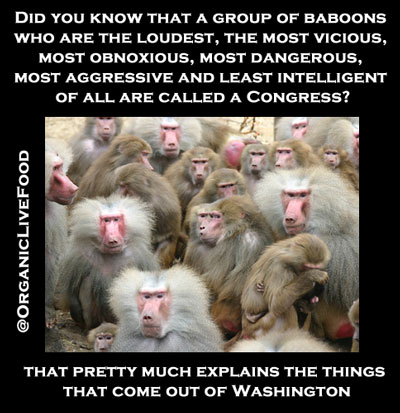 The members of Congress choose to subsidize obesity and junk foods while passing more regulations and higher fees on organic labels and local produce. May be the reason is that the members of congress are just a group of baboons in charge of policies that benefit the top corporate elites of Monsanto or DuPont. Did you know that a group of baboons who are the loudest, the most vicious, most obnoxious, most dangerous, most aggressive and least intelligent of all are called a Congress?  And as politifact explains, “that pretty much explains the things that come out of Washington”.

Our so called members of congress and House of representative choose to keep corn or farm subsidies that do benefit the top major food companies. These baboons have no problem bailing out the big banks (with our tax dollars) or giving billions of dollars of tax breaks to Exxon Mobil or Chevron, but are against food stamps (so a family won’t starve to death) or helping a single mother with Planned Parenthood.

The fact is that the obesity related diseases account for 70% of the healthcare costs in US. We cannot afford to continue under the same path and pay for the hidden costs associated with subsidizing GMO corn or junk foods. The top chemical and junk food corporations should be taxed heavily and we should start subsidizing fresh fruits and vegetables instead.

Large medical bills that most people can’t afford to pay are the main reason behind 60% of bankruptcies in US. You may be surprised to know that these are people who already have insurance that wouldn’t cover their bill. Even under the “affordable care act” more than 30 million Americans are left uninsured and have to pay expensive and ridiculous penalties for not purvchasing healthcare.

We have to come together as a community and make fresh fruits and vegetables available and affordable for the entire country:

Keep in mind that the cost of obesity is about 150 billion dollars a year. This cost will only go up if we don’t replace our profiteering and wasteful food system with a sustainable one. We don’t have enough fruits and vegetables for everyone if the entire country decides to eat a nutritional diet. Only 3% of US farm lands are used for growing fruits and vegetables while 50% of farm lands are used for planting GMO corn or soy. It’s no surprise why farmers prefer to grow corn since our government is spending millions of our tax dollars on corn subsidy.

Low income families have also less access to fresh grocery food stores or farmers market. Instead of spending millions of dollars on corn subsidy, we should make fresh fruits and vegetables available and affordable for everyone in the country. We have to make healthy school launches available and affordable for every kid. Prevention is always better than cure and we could save billions of dollars in healthcare by cutting the cost of obesity related diseases.

We also have to shut down factory farms, and stop subsidizing genetically modified corn linked to a wide range of chronic diseases. We have to make a healthy and nutritional diet a top priority for the entire country and if we fail to do what’s right, all of us as individuals or community will end up paying a serious price.