According to the statistics, more than 80% of the Americans have magnesium deficiency. Magnesium is an important mineral for the body and it’s used by variety of organs such as heart, liver, bones and kidneys. The body uses magnesium for detoxification process in order to get rid of accumulation of heavy metals, chemicals, and other toxins. Magnesium is essential for protein synthesis, improving digestion, building and relaxing muscles, boosting energy and helping to absorb other valuable nutrients such as calcium, vitamin D, fiber, protein and zinc.

Here are the top following factors and health risks that can lead to magnesium deficiency:

The role of magnesium in preventing heart disease:

Magnesium is necessity for healthy function of heart muscles. Heart drugs such as diuretics, antibiotics, diabetic medications, and osteoporosis/anti-malarial drugs could interfere with magnesium absorption and deplete the body from magnesium. Keep in mind that when the body is depleted from magnesium, heart drugs such as digoxin can become toxic. Digoxin can also interfere with magnesium absorption and should not be taken with magnesium supplements. The Western diet has a ratio of calcium to magnesium of 6 to 1. According to researchers, high intake of calcium could increase the risk of heart disease including strokes and sudden death. Researchers suggest that magnesium IV is superior to heart drugs in preventing heart disease. In fact, heart patients who were given IV magnesium had 74% lower mortality rate compared to those who were given a drug trial called ISIS.

The role of magnesium in preventing diabetes:

Over 300 metabolic functions in the body are regulated with magnesium and normal glucose levels happen to be one of them. Magnesium deficiency is common in diabetics and people with diabetes should get enough magnesium via foods and supplements. According to researchers, people who eat a diet high in magnesium have lower risk of developing diabetes.

The role of magnesium in preventing osteoporosis: 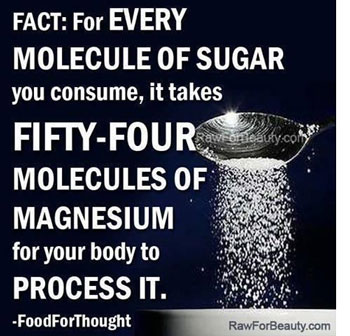 Although there is this misconception that foods high in calcium such as dairy products are essential for healthy bones, research shows that 60% of magnesium in the body is stored in the bones. Magnesium is found in over 325 enzymes in the body that control thousands of chemical reactions. Magnesium plays a key role in absorption of calcium and vitamin D. According to Dr Carolyn Dean, M.D, “It turns out that all the enzymes metabolizing vitamin D require magnesium as a necessary co-factor. When you take high doses of Vitamin D and if you are already low in magnesium, the increased amount of metabolic work drains magnesium from its muscle storage sites. That’s probably why muscles are the first to suffer magnesium deficiency symptoms — twitching, leg cramps, restless legs and charlie horses. Angina and even heart attacks affecting the heart muscle are all magnesium deficiency symptoms”.

According to a recent research published in the American Academy of Pediatrics, magnesium is more important in kids’ bone health compared to calcium. “Lots of nutrients are key for children to have healthy bones. One of these appears to be magnesium. Calcium is important, but, except for those children and adolescents with very low intakes, may not be more important than magnesium” says Dr Steven A. Abrams MD, professor of pediatrics at Baylor College of Medicine in Houston.

The role of magnesium in preventing cancer:

Research also shows that lab rats deficient in magnesium could develop tumors of the thymus (an organ of the immune system that helps to fight infection). Other studies show that magnesium deficiency could increase the risk of different cancers.  In another research with the tile of “Magnesium and cancer: a dangerous liason”, researchers suggest that increasing magnesium intake might be helpful in the prevention and treatment of cancer.

The role of magnesium in preventing migraines:

Researchers suggest that taking magnesium supplements could help to reduce migraine attacks. “These results have made us think that magnesium is a beneficial agent in prophylaxis of migraine without aura and might work with both vascular and neurogenic mechanisms” say researchers at University in Kayseri, Turkey.

Magnesium plays an important role in detoxification of the body:

Magnesium plays a critical role in detoxification of the body from toxins, chemicals, free radicals, and heavy metals such as lead, mercury, cadmium, arsenic and aluminum.

In a study, researchers suggest that magnesium could neutralize the toxicity of chemicals like sodium oxylate.  According to researchers, rabbits that were given toxic dosage of sodium oxylate died immediately except those who were given high dosage of magnesium. Keep in mind that lack of detoxification and accumulation of heavy metals and free radicals can lead to a wide range of health issues such as cancer and Parkinson’s disease and Alzheimer’s.

>> Raw organic cacao beans: Keep in mind that milk chocolates are filled with sugar, additives and preservatives that deplete body from magnesium. Most chocolates are not real and they are not made from real cacao. If you buy dark chocolate, make sure that it’s low in sugar and is made of more than 75% raw cacao beans.