Avoid overcooking your foods; exposing meat to high temps during grilling or barbecuing could significantly increase your risk of cancer

Exposing foods to high temperature or cooking foods for a long period of time can destroy all the valuable nutrients in your meal. However, worse than overcooking is barbequing or grilling since the organic compounds in your food go through a change in their structure and become highly toxic or even start producing carcinogens.

Grilling and barbequing is pretty popular in US, especially in summertime when the weather is good and friends and families gather outside together to enjoy a good time. But most people are simply unaware that grilled or barbequed meat pose a big health threat to themselves and their loved ones.

Barbequed or grilled meats (like beef, pork, fish, or poultry) aren’t the only toxic foods and even burnt or browned crust in bread or pastries does pose a serious health risk to a lot of people.

In comparisons, only half a gram of overly cooked/burned foods have as much toxins and free radicals as someone smoking two packs of cigarettes a day:

That obviously indicates that eating raw or lightly cooked foods can reduce your exposure to cancer-causing carcinogens and free radicals.

A growing number of research suggest that exposing meat to high temperatures (during barbequing, grilling, broiling or frying) will form compounds known as heterocyclic amines (HCAs) and polycyclic aromatic hydrocarbons (PAHs) that are dangerous carcinogens and are linked to cancer. In fact, when you expose meat to high temperatures, other toxic chemicals such as heterocyclic aromatic amines (HAAs) are formed as well.

Research also shows that men who eat 1.5 servings of pan-fried red meat every week have 30% higher risk of developing prostate cancer. Other recent studies also indicate that people who regularly eat heavily cooked meats like hamburgers are at higher risk of prostate and breast cancer.

Keep in mind that the chemical structure of foods, in particular meat exposed to high temperatures (anything over 300 degrees) changes into cancer-causing carcinogen. Due to excessive heat, the fat, protein and carbohydrate in meat change into toxic compounds linked to heart disease, cancer, premature aging, and many other chronic diseases.

Although organic raw foods have many advantages over cooked foods, many people cannot eat raw foods all the time and there are many cooked dishes and soups that are made in a healthy way: 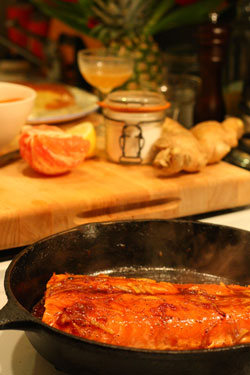 There have been many studies that a diet high in meat can increase your risk of cancer and many other chronic diseases. But a diet high in vegetables and fish, in particular wild sockeye salmon (lowest mercury fish=0.09 and high in omega 3 fatty acids) can be healthy and nourishing. Keep in mind that you should avoid frying or overheating fish since eating fried foods including fish can increase the risk of heart disease.

So instead of frying, cook your fish gently and add herbs and spices to protect the nutrients in salmon against heat. You could also add great taste and nutrition to your diet by including other cooked dishes such as organic brown rice, organic quinoa, organic legumes like beans, steamed vegetables (such as broccoli, kale, Brussels sprout), or organic red potatoes. Keep in mind that you should at least include 50% or 75% raw foods into your daily diet.

Here are the following herbs and spices you could use a salmon dish:

You could cover the top of your salmon with the above herbs and spices. Let the salmon (covered with herbs and spices) cook gently with coconut or grapeseed oil for 10 -15 min. Then turn the salmon the other side and add freshly squeezed lime juice to it. Close the lid and let the salmon cook for 20 to 25 min.

You can enjoy salmon with salad, organic brown rice or quinoa. Steaming your vegetables and adding herbs and spices to them is also a great way of cooking dishes healthfully.

Bone appétit and stay happy and healthy everybody!