In the last decade, many independent scientists and researchers have warned the public about the growing health and environmental threat associated with genetically modified foods. Many researchers have warned the public about the health risks associated with Monsanto’s popular weed killer Roundup, although FDA, Monsanto and biotech lobbyists claim that GMOs and glyphosate (the active ingredient In Monsanto’s Roundup) are pretty harmless. The World Health Organization has called for a ban on glyphosate suggesting that glyphosate is a cancer causing carcinogen and toxic to the environment and human’s health.

Here are the top 10 reasons why you should stop eating GMOs:

1. GMOs and glyphosate are linked to a wide range of chronic diseases such as cancer, infertility, gastrointestinal problems, DNA change, and autism

>> Cancer: According to researchers, glyphosate can increase oxidative stress which is the main cause of cancer. “Glyphosate exposure and metabolism in the liver can lead to excessive production of malondialdehyde (MDA) and oxidative stress through unregulated generation of reactive oxygen species (ROS)” researchers suggest. Other researchers including Dr Arpad Pusztai have also found out that GMOs are unsafe and can lead to liver damage, digestive issues, and cancer. You probably remember the findings of Séralini study and the horrible tumors in lab rats that were fed on Monsanto’s GMO corn.

>> Infertility:  Since introduction of GMOs, the rate of infertility has gone up drastically. According to researchers, “within 1 to 48 hours of the exposure to roundup on male rats at a concentration range between 1 and 10,000 parts per million (ppm), the testicular cells of the mature rats were either damaged or killed”. According to a study, “even at concentration of 1 ppm, Roundup was able to reduce testosterone levels by 35%”. According to another study, conducted by Surov’s Institute of Ecology and Evolution of the Russian Academy of Sciences and the National Association for Gene Security, “After feeding hamsters for two years over three generations, those on the GM diet, and especially the group on the maximum GM soy diet, showed devastating results. By the third generation, most GM soy-fed hamsters lost the ability to have babies. They also suffered slower growth, and a high mortality rate among the pups”.

>> Gastrointestinal problems: According to researchers, glyphosate can lower the level of beneficial bacteria in the gut and promote the growth of harmful strains. Researchers have linked GMOs to Irritable bowel syndrome, celiac disease, intestinal disorder, leaky gut and chronic constipation.

>> DNA damage: According to a recent study published in the Public Library of Science (PLOS), genetically modified organisms could enter the blood and change human DNA. “The results indicated that meal-derived DNA fragments (which were large enough to carry complete genes) can avoid degradation and through and ultimately enter the human body's circulation system” researchers say. Researchers suggest that the meal-derived DNA fragments are large enough to pass genes from GMO plants to humans.

>> Autism: According to researchers, a diet high in GMOs and toxic pesticides can fuel autism. In a study published in American Academy of Pediatrics, the researchers suggest that ‘gastrointestinal problems are common in children with autism’. Researchers from Massachusetts Institute of Technology (MIT) also suggest that glyphosate in Roundup is a major driving force behind autism. According to the leading author of the study, Dr. Seneff “the autism rate has come up from 1 in 10,000 in 1970 and that is already an incredibly alarming change. I got worried eight years ago when I was seeing it rising, and people were saying, 'Oh, it's just more reporting, more diagnosis' -- that's a way to hide the evidence”.

2. Glyphosate is spreading diseases, viruses and pathogens in the soil and has devastating effects on the health of plants, soil, and the environment as well as the wild life (neonicotinoids used for treatment of 94% of GMO corn are killing millions of bees, birds, and butterflies):

3. Even if you are not eating GMOs, Monsanto’s toxins are everywhere and impossible to avoid; BT toxin has been found in the blood and urine of 93% of women and their unborn fetuses. Glyphosate is also everywhere, even in the breast milk of mother across America

A report by Moms across America has been suggesting that glyphosate is in the breast milk of women across America. According to the report, glyphosate over time can accumulate in the human tissue. The US authorizes and the biotech companies have been rejecting the result of the breast milk study suggesting that the testing methods weren’t compatible with the international standards. However, Zen Honeycutt, the founder and CEO of Mom’s across America, says that their lab had the best equipments they could find. “The critics might criticize the lab or the testing we chose, but I urge you to ask yourself or our government why does a mom have to do these tests? Why isn’t our government doing it? Why the chemical company who manufactures these chemical isn’t doing it? Why the manufactures of baby formula aren’t doing it?” she asks.

Zen Honeycutt also talks about his son and how he had autism symptoms and detectable level of glyphosate in his urine. Zen Honeycutt explains that she put her son on a GMO free/organic diet and within six weeks the glyphosate in his urine disappeared, so did the symptoms of autism. Keep in mind that researchers suggest that alteration of gut bacteria replicates autism. Since introduction of GMOs, both autism and inflammatory bowel disease have skyrocketed.

In addition to autism, a recent study has been linking glyphosate to breast cancer suggesting that chronically sick people have high levels of glyphosate in their urine. Monsanto’s Bt toxin is found in blood and urine of 93% of pregnant women and their unborn fetuses. Thanks to giant biotech, glyphosate is now everywhere, even in the air we breathe or the water we drink.

4. Livestock grazing on Monsanto’s GMO corn treated with glyphosate are often sick and suffer from birth defects, infections or infertility

Independent studies have suggested that glyphosate increases the number of miscarriages and infertility in livestock. Most livestock are fed on concentrated feeds that have glyphosate residuals in them. Recent report shows horrifying images of birth defects in livestock that were fed on GMO corn treated with glyphosate. Keep in mind that animals fed on Monsanto’s GMO corn suffer from diarrhea and painful infections so the farmers have to regularly treat them with high levels of antibiotics.

5. Even Monsanto admits that glyphosate is TOXIC; but not toxic enough 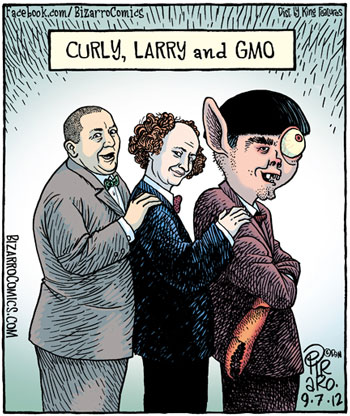 Monsanto’s spokeswoman in Germany ‘UrsulaLuttmer-Ouazane’ says that glyphosate is toxic, but it’s ok because other herbicides and chemicals are even more toxic. Ursula Luttmer who is in charge of Monsanto’s Glyphosate Task Force (GTF) in Germany says “of course we produce substances which are toxic; it's always a question of whether one is more toxic than the other. Glyphosate has a relatively low level of toxicity as a chemical substance within our company. Of course if something has a higher level of toxicity then we must say it is more toxic. But if glyphosate is on the lower end of the ranking, then everything else is more toxic”.

So Monsanto knows that glyphosate is toxic, but it’s ok to use it because everything else is even more toxic? Obviously Monsanto and FDA both believe that there is a limit on how much poison is acceptable or even safe to be tested on human beings.

6. The allowable limit of glyphosate in US is dangerously high compared to Europe

7. Despite the promises of biotech companies, GMOs have increased the use of chemicals

Since introduction of GMOs, the use of glyphosate has increased by 527 million pounds. “The biotech industry is taking us into a more pesticide-dependent agriculture when they’ve always promised, and we need to be going in, the opposite direction” says Bill Freese, the science policy analyst for the Center for Food Safety in Washington.

8. Every year, biotech approves new generation of GMOs resistant to even more toxic herbicides such as isoxaflutole (IFT) or Agent Orange

As if the health and environmental risks associated with glyphosate weren’t overwhelming enough, the USDA approves the second generation of GMOs resistant to even more toxic herbicides. Isoxaflutole (IFT) classified by EPA as a probable human carcinogen is linked to cancer and developmental toxicity.

Other varieties of GMO corn and soy (resistant to toxic chemical known as 2,4-dichlorophenoxyacetic acid/2,4-D) are also waiting on USDA’s queue for approval. 2,4-dichlorophenoxyacetic acid (2,4-D) is one of the main ingredients in Agent Orange that was used during the Vietnam war. Over 3 million Vietnamese have been affected by Agent Orange, and more than 150,000 children have been born with birth defect.

9. GMOs are subsidized with your tax dollars and the scientific community who question the safety of GMOs and Roundup have been attacked and discredited by biotech companies

Billions of dollars of our tax dollars are spent on subsidizing GMO corn. We are basically subsidizing obesity and sicknesses that are profiting the giant agribusinesses. Keep in mind that the popular weedkiller Roundup makes up for 45% of Monsanto’s income. Many independent scientists who have published the truth about GMOs have been defunded or attacked for one bogus reason or another.

In fact, the findings of many independent researchers including Dr Arpad Pusztai, Dr Judy Carman, or Dr Seralini have been discredited or attacked and their websites have been hacked and blocked. Keep in mind that the conflict of interest is a defining problem in modern science. FDA or other governmental regulatory agencies don’t perform any independent studies on their own about the safety of a product and completely rely on the findings that are presented to them by the manufactures.

10. Despite the demands of 90% of the Americans, the US government, members of congress, and biotech companies are refusing to label GMOs

This is the scariest of them all! Why FDA and biotech companies are refusing to label GMOs? They are hiding GMOs despite the demand of 90% of the American public that want GMOs labeled. The companies have to disclose the material used on our toilet padding seats, so why not label GMOs and call it ‘proudly made with GMOs’. Why the biotech is spending millions of dollars to kill GMO labeling efforts since they don’t think there is anything wrong with their products? Why not let people choose freely whether or not they want to eat GMOs? Isn’t this a free country and shouldn’t people have freedom of choose if they don’t want to eat GMOs?

Before leaving the White House, Obama who promised to label GMOs passed the dark act that would undermine states mandatory GMO labeling and victories that were achieved in Vermont and Connecticut. The dark act signed by President Obama does exempt the biotech companies from labeling GMOs forever. While 68 different countries have required GMO labeling and more than 30 countries have banned GMOs, the US Senate and the House have been trying to ban GMO labeling.