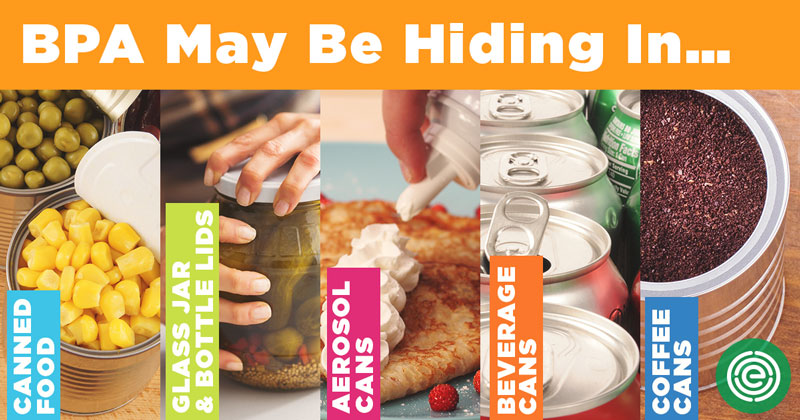 The hormone disruptive chemical known as Bisphenol-A (BPA) is widely used in plastic containers and canned foods. BPA mostly affects newborns and children and it has been linked to a wide range of health problems.

According to a research published in Kidney International, kids who have higher levels of BPA in their urine have significantly higher levels of albumin (a protein produced when kidneys get damaged).

Studies also suggest that bodies of children absorb 11 times more BPA than adults. According to researchers, children are mostly affected by exposure to BPA and related endocrine disruptors. Early puberty, heart disease, difficulty in learning and hypertension are some of the health issues related to BPA.

Here are the top 10 health risks associated with BPA:

1. BPA can trigger the growth of cancer cells leading to breast and prostate cancer

2. BPA can increase the risk of weight gain and obesity

According to a study from Shanghai University, kids who have higher level of exposure to BPA tend to have higher BMI. Researchers suggest that exposure to high levels of BPA can increase the risk of obesity in children by 50%.

BPA is also called "obesogen" by the researchers; a chemical that can slow down metabolism and lead to weight gain and obesity. The rate of obesity is increasing drastically and a according to a recent study American women are more obese than ever. According to researchers, "worldwide exposure to BPA in the human population may be contributing to the worldwide obesity epidemic."

3. BPA can cause auto-immune disorder

According to researchers, exposure to high levels BPA can lead to auto-immune diseases.  “With the growing epidemic of autoimmune disease worldwide and the extensive use of consumer goods containing BPA, we must examine the risk of BPA as a potential triggering compound in autoimmune disease” says the leading author of the study Dr Kharrazian. Other studies also show that BPA is an endorphin disruptor that damages the immune system of wildlife and humans.

4. BPA can cause reproductive issues, infertility, and early puberty

BPA can cause reduction in sperm production and increased prostate size which can result in reproductive issues in men. According to researchers, exposure to BPA during pre-puberty years in girls could accelerate their pubertal development and lead to weight gain.

5. BPA can lead to difficulty in learning, attention deficient disorder, and hyperactivity

Researchers suggest that exposure to BPA could lead to difficulty in learning, and hyperactivity in children. According to researchers, both BPA and its substitute (BPA free bottles known as bisphenol-S, or BPS) can change the chemicals in the brain and lead to attention deficit hyperactivity disorder (ADHD).

6. BPA can damage the brain and result in changes in behavior

According to a recent study, BPA accumulates a lot faster in the body than what the researches previously thought. Accumulation of BPA in the body can result in changes in the brain and behavioral problems. Researchers suggest that BPA has devastating effect on the fish population and could disrupt the hormones in fish and lead to behavioral changes. Another study also suggests that prenatal exposure to BPA can cause changes in the brain structure of lab rats and change their behavior.

7. BPA can cause asthma and breathing problems

8. BPA can lead to neurological problems and nervous system issues

According to researchers at University in North Carolina, babies exposed to BPA during early stages of pregnancy are at higher risk of developing neurological problems. In a study published in the Proceedings of the National Academy of Sciences, researchers suggest that BPA has negative effects on the nervous system and brain function.

10. BPA can cause other diseases such as diabetes, kidney damage, and heart disease

Avoiding plastic containers on its own might not be enough to protect you against BPA researchers say:

Here are the top recommendations to lower your risk of exposure to BPA: