Recently president Obama signed the dark act known as S.764 bill into a law denying millions of Americans from their right to know what’s in their food. The dark act will undermine the recent GMO labeling victories in Vermont as well as Connecticut, Maine, and Alaska. The law will also prevent other states from passing mandatory GMO labeling in future.

While more than 90% of the Americans are in favor of GMO labeling, the White House and the Senate as well as the House majority have been fighting to undermine any attempts by the consumers, states and food activists to label GMO foods. 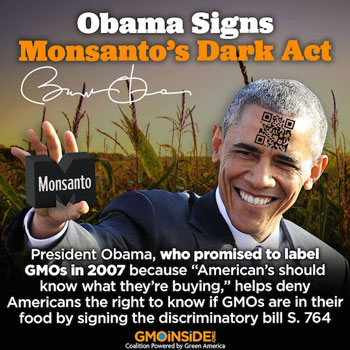 The dark act drafted by Senate Agriculture Chairman, Pat Roberts (R-Kan) and Senator Debbie Stabenow (D-Mich) and backed by the giant biotech Monsanto and Grocery Manufacturers Association is a proof that most Americans live under the illusion that they live in a real democracy. In a real democracy, a handful of giant corporations and few corporate puppets in the Senate and the House won’t have the power to undermine the right of the majority.

The dark act will also weaken the mandatory GMO labeling laws passed by few States such as Vermont and Connecticut by hiding GMO ingredients in thousands of consumer products.  Instead of a clear label disclosing GMO ingredients, the dark act will allow giant biotech companies and food manufactures to get a way and hide GMOs by including QR barcode or 1-800 numbers on food packages. The consumers have to call the 800 number or scan the barcode of the food packages with their smart phone to view more information about a product.

In the last 8 years of his presidency, Obama has left a legacy worse than Bush when it comes to food transparency, drones, NSA and Obama Care spying, attacks on journalism and whistleblowers, government lies and corruption, violations of our Constitutional rights, and cracking down on civil liberties:

Back in 2008, when Obama became president he promised to label GMO foods and protect the right of Americans in knowing what they are eating. However, the reality can’t any further from the truth, since soon after Obama got into the White House, he appointed Monsanto’s former VP Mike Taylor as FDA deputy food commissioner.

Obama also changed the entire healthcare system. In fact, Uncle Sam’s intrusive Trojan horse known as Obama care or affordable is just another Ponzi scheme designed to profit and spy on millions of Americans. In order to get a healthcare plan, all your private information (such as your income, your tax return, immigration status, marital status, or health/medical condition) should be checked and approved by the Feds.

You also have to pay a penalty if you don’t want to purchase a healthcare plan. Obama care penalties are spinning out of control and for tax year 2016, the penalty will rise to 2.5% of your total household adjusted gross income, or $695 per adult and $347.50 per child, to a maximum of $2,085 [source].

The approval of the dark act under the Obama’s administration will make GMO labeling illegal and the giant biotech will have immunity from the legal system and will be able to unleash unapproved varieties of GMOs into our food supply:

Soon after Obama signed the Dark Act, farmers have reported 22 unapproved varieties of GMO wheat growing in the state of Washington. These are varieties of genetically modified wheat that are not approved for consumption or production in the US but they are growing in Washington and possibly contaminating other farms nearby.

There have been many studies about environmental and health risks associated to GMOs, but not nearly enough to determine how unapproved variety of Round-up ready wheat could impact the eco-system as well as our health.

Researchers believe that the illegal Round-up ready wheat can bioaccumulate in the soil and could have devastating effects on the environment as well as our planet. Keep in mind that if the modified Klebsiella planticola bacterium were released into the wild, it would have killed every single terrestrial plant on the planet and would have destroyed our habitat.

USDA recently approved genetically modified salmon despite numbers of studies suggesting that GMO salmon could harm the ecosystem and breed with wild trout. The dark act will allow GMO salmon to be sold without any label and without the consumer’s right to know.

The dark act is a major victory for the pesticide Empire and few corporate elites, and we as consumers should fight back:

While 38 different countries have banned GMOs and more than 60 other nations have required mandatory GMO labeling, the corrupt corporate puppets in US Congress pass S. 764 bill into a law to keep Americans in dark about what they are buying.

It’s shameful that the US president and members of Congress swear in oath to protect, preserve, and defend our constitutional rights yet they betray the demand of the American public to label GMOs. The US congress and the White House are representatives of few giant corporations who don’t simply care about our food safety or transparency.

It is up to us, the consumers to fight back and overturn the dark act and not allow the dark act to undermine our GMO labeling victories in Vermont or Connecticut. We can vote with our dollars and buy certified organic foods. If Uncle Sam decides to hide GMO foods, we can fight back by boycotting any food products that don’t have a clear label by disclosing all the ingredients.