In the past few decades, many food products filled with cheap ingredients, toxic additives, and harmful preservatives have found their way into our diet. High fructose corn syrup widely used in many processed foods is one of these toxic additives.

Back in the 1970s and 80s, the US had problem with producing enough corn, so the government made a decision to subsidize corn. But within one decade, the US was producing a lot more corn than the public consumption. The farmers wanted to keep the corn subsidy but they had to find a way to use the excessive amount of corn. So the farmers decided to exploit the 1980s corn shortage crisis and keep their subsidies.

The farmers figured out that they could extract sugar from corn, but they could keep sugar for only a year and the storage facility for storing sugar was too expensive and not cost effective. So they discovered a way to turn corn into something a lot more cost effective known as high fructose corn syrup (HFCS). High fructose corn syrup is basically mass and a great substitute for sugar but a lot cheaper than sugar. The farmers could also store HFCS for more than 12 years.

In the process of turning corn into HFCS, ‘the corn maize is milled to produce corn starch and an "acid-enzyme" process is used in which the corn starch solution is acidified to begin breaking up the existing carbohydrates, and then enzymes are added to further metabolize the starch and convert the resulting sugars to fructose’.

With the new treatment, the farmers could keep their subsidy and at the same time keep their cost down effectively. Up to this day, the farm subsidies count for more than $20 billion a year of taxpayers’ money and corn subsidies make up for eight billion dollars a year.

The fact is that our tax dollars are subsidizing obesity and diseases while a few giant food companies and a handful of rich farmers benefit from it. HFCS might be great for farmers, food manufactures and food producers because it’s cheap and reduces the cost but it has been proven to be extremely toxic to people’s health.

As mentioned, HFCS isn’t a naturally occurring substance like organic cane sugar or organic maple syrup. HFCS is a toxic by product of the food industry far from what’s found in Mother Nature. The biochemistry behind cane sugar (sucrose) and HFCS are very different. 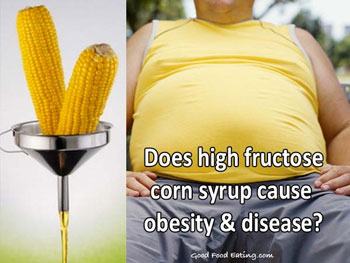 Since there is no chemical bond in HFCS, HFCS isn’t fully digested by our body and is more rapidly absorbed into the bloodstream. Fructose is directly absorbed by many organs in the body including liver and that can lead to liver damage and lipogenesis(the production of fats like triglycerides and cholesterol). No wonder why fatty liver is pretty common and affects more than 70 million Americans.

According to a research by Dr. Bruce Ames at the Children’s Hospital Oakland Research Institute, HFCS sucks a lot more energy out of the body in order to be absorbed in the gut. The whole process depletes the energy fuel source in the body and could result in inflammation and auto-immune disorder.

2. HFCS and obesity – We are basically subsidizing obesity

The obesity rate is skyrocketing in US and one in three children born after the year 2000 is either obese or overweight. The rapidly absorbed glucose from HFCS in the body can drive up the insulin level and trigger body’s fat storage hormone leading to increase in appetite or weight gain. According to researchers, high-fructose corn syrup results in obesity, increased body weight, body fat and triglyceride levels in lab rats.

As mentioned, fructose is metabolized differently from glucose in the body. HFCS isn’t fully digested in the body and is rapidly absorbed into the blood stream. The rapid absorption of fructose drives up the insulin levels which can lead to metabolic disturbances and type II diabetes.

According to researchers, since introduction of HFCS into our food supply, the rate of diabetes has increased by 2,100%. Other studies have shown that HFC could result in negative changes in glucose metabolism and significant reduction in insulin sensitivity.

According to a recent research published in the Journal of Nutrition, HFCS is even more toxic than white bleached sugar and does more harm to animals in the laboratory. According to researchers, HFCS could shorten lives and could lower the rate of reproduction in lab rats.

According to the paper ‘the female mice fed a diet which contained 25 percent of calories from added fructose and glucose carbohydrates known as monosaccharides that are found in corn syrup died at a rate 1.87 times higher than female mice on a diet in which 25 percent of calories came from sucrose. The mice on the fructose-glucose diet produced 26.4 percent fewer offspring than their counterparts on the diet containing added table sugar’.

5. HFCS and mercury – dementia and cancer

We all know that cancer cells thrive on sugar (in particular refined sugar). However, researchers have found out that HFCS is even more toxic and does more harm than white sugar to animals in the lab.

According to researchers, HFCS triggers the growth of pancreatic cancer cells. Other studies have shown that HFCS can increase the risk of different types of cancer.

Researchers suggest that a junk foods high in sugar, salt and HFCS could lead to neurological problems such as Alzheimer disease. According to studies, a diet high in fructose can increase the risk of dementia.

Keep in mind that because of chlor-alkali products used in its manufacturing, HFCS has high levels of heavy metals such as mercury. When chemists run tests on HFCS in the laboratory, they suggest that strange chemical peaks show up that are not glucose or fructose. The toxicity of these compounds cannot be fully explained by the scientists; however FDA claims that high Fructose Corn Syrup has GRAS (Generally regarded As Safe) status. According to recent reports even foods and drinks made with HFCS have high levels of toxic mercury.