Saffron is an exotic spice widely used in Middle Eastern cuisine for its great taste and medicinal properties. Dried saffron is used for its beautiful golden color and aroma in desserts and savory dishes in India and Iran. This golden spice has many healing properties that ancient Persians knew thousands of years ago. The medicinal benefits of saffron are proven today by modern science.  Over the last 4,000 years, this golden spice has been used for treatment of more than 90 different illnesses.

The magical Crocus sativus flower is where the spice saffron is driven from. Iran isthelargest saffron producerin the world, exporting saffron to more than 46 countries around the globe. Harvesting saffron is entirely done manually in just one week of the year and that makes saffron a very expensive spice. Saffron is such a potent spice that a pinch of saffron (usually about 15 to 20 threads) is what you need to spice up your dishes.

It’s great to have saffron in your kitchen as a part of your medicine cabinet and use saffron for its beautiful color and great medicinal properties. The hidden aroma and enzymes in saffron could be released when grinded and heated. Click here to find out how to brew saffron.

Here are the top ten health benefits of this exotic spice:

1. Fighting against neurological problems such as Parkinson’s and Alzheimer’s disease - Alternative for placebo, Donepezil, Memantine, and levodopa

According to studies, taking saffron can help to prevent Parkinson’s disease. Researchers from University of Michigan suggest that the natural compound in saffron known as curcumin could help to prevent the clumping of proteins involved in the development of Parkinson's disease.

Researchers at Tehran University suggest that saffron is as effective as Memantine (prescription drug for Alzheimer’s) in slowing cognitive decline in patients with Alzheimer's disease. According to researchers, saffron can slow down cognitive decline even better than drugs placebo or Donepezil that are used for treatment of dementia.

2. Fighting against depression and sexual dysfunction- Alternative for antidepressants such as Prozac, Paxil, Zoloft, and Viagra

Ancient Persians always believed in the miracle of saffron for treatment of depression. According to recent studies saffron is equally effective, even more superior to antidepressants for balancing the mood. Antidepressants are usually given to the patients with Alzheimer’s disease, despite the fact that they have severe side effects such as depression, suicidal thoughts, anxiety, nausea, weight gain, and insomnia.

According to research, saffron has been proven to be better than pharmaceuticals in boosting memory, improving brain function, and beating depression. Research on both animals and humans have shown that saffron is effective in treatment of depression since it helps with interaction of serotonin and noradrenaline.

According to researchers, saffron is superior to drug Prozac for treatment of depression. Antidepressants like Prozac work by elevating the levels of serotonin, the so-called happiness hormone. Studies suggest that plants and spices like saffron have all kinds of human neurotransmitters such as serotonin, melatonin, and dopamine for boosting the mood and reducing anxiety.

Studies suggest that curcumin extract (made from saffron or turmeric) has equal effect to prescription drug fluoxetine and Prozac for treatment of depression without the adverse effects of these drugs. Many other studies have shown that saffron is a safe alternative for antidepressant drugs.

3. Great anti-inflammatory used for treatment of Rheumatoid Arthritis – Alternative for NSAIDs such as Advil, Motrin, ibuprofen, and aspirin, and DMARDs like dexamethasone

According to a study published in the Journal of Clinical Biochemistry and Nutrition, saffron is superior to drugs NSAIDs and DMARDs for treatment of arthritis. Saffron could also reduce the symptoms of arthritis without the adverse side effects of the drugs.

According to a paper published in the journal Phytotherapy Research, the polyphenol in turmeric and saffron known as curcumin is as effective as steroids in management of chronic anterior uveitis (an inflammatory eye disease).

The natural compound is saffron known as ‘gallic acid’ helps to boost the immune system and prevent the risk of diseases. According to researchers, curcumin (diferuloylmethane), the antioxidant with yellow pigment in Saffron is a chemosensitizer and radiosensitizer for tumors and chemoprotector and radioprotector for normal organs. The carotenoids in saffron can help to fight against cancers such as leukemia, pancreatic, lung, colon and breast cancer. According to researchers, carotenoids in saffron acts as a powerful antioxidant in fighting cancer. Researchers also suggest that saffron can effectively fight against liver cancer.

5. Reducing the risk of cardiovascular disease - Alternative for Lipitor and atorvastatin 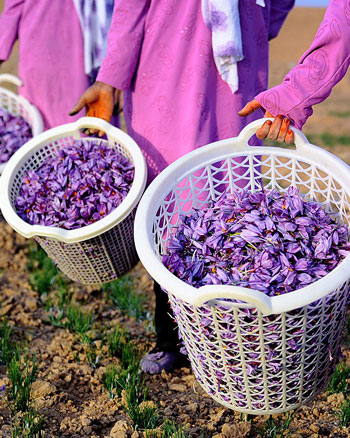 Recent research shows that the anti-inflammatory agent in saffron can help to improve the cardiovascular health. Studies suggest that a pinch of the exotic spice ‘saffron’ can prevent heart disease by controlling blood pressure, and lowering the level of bad cholesterol.

6. Lowering the risk of diabetes – Alternative for Metformin

According to research, the potent antioxidant and anti-inflammatory compounds in saffron can help to control blood glucose, cognitive deficit, lipid profile, reduced oxidative stress, nitric oxide, and TNF-α in the diabetic rats.

Researchers suggest that “the blood glucose of healthy rats has decreased 28% with the intra-peritonial injection of ethanolic saffron extract and this decrease has been around 40% in diabetic rats. In addition, saffron extract has been reported to have hypoglycemic effect (Mohajeri et al. 2008). It has been observed in our study that the blood glucose concentration and Hba1c levels of the group in which STZ induced experimental diabetes is formed, have increased significantly when compared to non-diabetic group”.

According to researchers, edible plants such as jujube, barberry and saffron can benefit diabetic rats. Researchers suggest that taking herbal plant saffron combined with resistance training could have a strong therapeutic effective factor on diabetic parameters.

According to researchers, the natural compounds in saffron could be beneficial for patients with asthma. The animal studies have shown that saffron extract or safranal can help to relieve asthma signs. Saffron is known for its therapeutic health benefits and taking saffron can ease breathing and help to treat other respiratory-related illnesses.

According to researchers, saffron could help respiratory function, asthmatic problems, and play an important role as lung tonic. Studies also show that phytochemical in saffron can play an important role in treatment of respiratory problems. According to studies, bronchodilatory effects of saffron could be attributed to the stimulation of β2-adrenergic and H1 histaminergic receptors.

Almost half of women experience painful periods during their menstruation cycle. For most of these women the discomfort and pain is bad enough to negatively affect their normal daily lives. Saffron is a great remedy for relieving the menstruation symptoms such as nausea, bloating, digestive issues, and cramps. The anti-inflammatory compounds in saffron are known to provide menstrual relief, and reduce stomach pain. According to researchers, saffron odor is beneficial for treatment of PMS symptoms, dysmenorrhea and irregular menstruation.

Researchers from Tehran University suggest that saffron capsules are even superior to menstrual drugs such as placebo for treating PMS symptoms such as depression, cramps, bloating, irritability, and fatigue. According to a research published in the medical journal BJOG, ‘three-quarters of the women on saffron capsules reported at least a 50 percent reduction in their PMS symptoms compared to only 8 percent of women in the placebo group’.

9. Treatment of cold, and flu, and infections in liver, urinary bladder and kidneys

The natural compound in saffron is a great remedy for enlargement of liver and infection of urinary bladder and kidneys. Both saffron and turmeric are commonly known to prevent kidney, bladder and liver disorders. Saffron can help to fight against common cold and flu and is as effective as drugs for curing infections such as yeast infection. Old Persians used saffron for treating coughs and common colds, smallpox, insomnia, hypoxia, and asthma. In ancient Persia Saffron was used as an aphrodisiac and antidote against poisoning. According to researchers, saffron can have positive effect on liver metastases in patients suffering from cancers with liver metastases.

Saffron face masks are better alternative for treatment of skin psoriasis, pimples or acne compared to skincare products that are filled with tons of toxins, harsh chemicals and free radicals. According to researchers, saffron is a natural antispasmodic, diaphoretic, carminative, emmenagogic and sedative. Research shows that saffron inhibited DMBA-induced skin carcinoma in mice when treated early.