The sweet Misery and a poisoned world, so they can kill you softly! Top 10 health risks associated with artificial sweeteners, ‘NutraSweet’ and aspartame 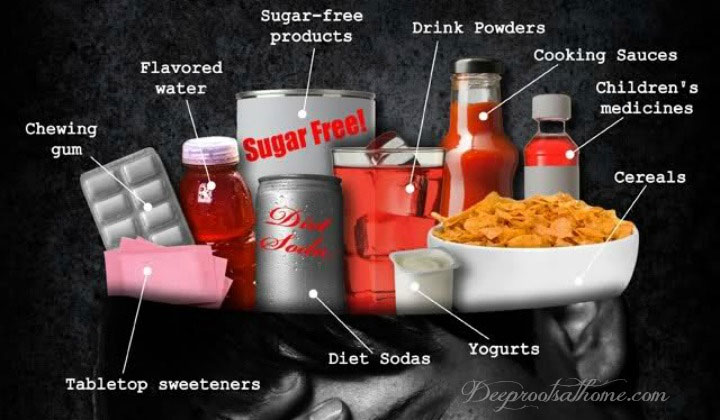 In the last few decades, the use of artificial sweeteners known as ‘NutraSweet’ or sucralose, aspartame, Saccharin, and splenda has been increasing drastically.

The artificial sweeteners have ‘zero’ calories and are 200 times sweeter than sugar. Aspartame consists of three compounds known as 10% methyl alcohol (wood alcohol), 40% aspartic acid and 50% amino acid phenylalanine. People with phenylketonuria (PKU) should avoid aspartame since they lack enzymes to convert phenylalanine to tyrosine (another amino acid). People with iron deficiencies and kidney disease should also avoid aspartame.  Keep in mind that high levels of phenylalanine can severely damage the brain.

A growing number of studies have linked methanol and its metabolite formaldehyde to Alzheimer's disease. According to researchers, methanol in aspartame can cause memory impairments and tau hyperphosphorylation in mice. Other research have identified Splenda as neurotoxin and concluded that Splenda could cause neurological disorders, Parkinson’s disease, and oxidative damage.

Methanol in aspartame has been linked to blindness, brain swelling, and inflammation of pancreas and heart muscles. In 2012, Harvard hospital published a study with the headline that ‘the truth isn’t sweet when it comes to artificial sweeteners’. According to researchers, ‘those who drink a daily diet soda sweetened with aspartame could have an increased risk of leukemia, lymphoma or non-Hodgkin's lymphoma’.

In a two year study originally performed by manufactures of aspartame rats fed on a diet high on aspartame developed tumors. In a 2016 study published in the International Journal of Occupational and Environmental Health, researchers suggest that artificial sweetener sucralose (brand name Splenda) can lead to cancer, and leukemia.

According to researchers, methanol in aspartame could lead to headaches, migraines, dizziness, nausea, numbness, and vision problems. Many lawsuits have been filed against NutraSweet/Equal ® Company on behalf of people who lost their vision in one eye or become blind after using aspartame.

4. Increase in blood sugar and leading to diseases such as to diabetes

According to researchers, aspartame can lead to diabetes and have negative impact on diabetics. Studies suggest that aspartame worsens diabetes and is more toxic than sugar for diabetics. ‘The artificial sweeteners used in diet drinks and other foods can disrupt healthy microbes that live in the gut, leading to higher blood sugar levels – an early sign of diabetes’, researchers suggest.

An increasing number of seizures and cardiovascular diseases are caused by aspartame. According to researchers, drinking diet soda can increase the risk of heart disease, stroke, and type II diabetes. A recent research suggests that aspartame can cause cardiovascular issues such as heart attacks and strokes in healthy and postmenopausal women. ‘Women who consume two or more diet drinks a day are 30 percent more likely to experience a cardiovascular event and 50 percent more likely to die from a related disease’ researchers say.

According to researchers, the artificial sweetener sucralose can affect animal behavior due to its oxidative and neurotoxic properties. Consuming aspartame can also lead to damages in the brain. ‘The long-term consumption of aspartame leads to an imbalance in the antioxidant/pro-oxidant status in the brain, mainly through the mechanism involving the glutathione-dependent system’ say researchers. Other studies have also linked aspartame to brain tumors.

Aspartame has been linked to depression, anxiety, and mood swings since it lowers the brain serotonin levels. According to a recent research, aspartame causes nerve damage in the brain which is related to depression, ADD, and ADHD.

7. Increase in appetite and cravings for carbohydrates, and weight gain

According to researchers, the artificial sweetener aspartame can stimulate fat storage and lead to weight gain. Studies suggest that saccharin and aspartame can cause more weight gain than sugar. Other studies suggest that the artificial sweeteners can be fueling the obesity epidemic. According to a study published in the American Journal of Clinical Nutrition, aspartame can result in weight gain and obesity in healthy women. According to research, ‘Intake of high-intensity sweeteners alters the ability of sweet taste to signal caloric consequences: implications for the learned control of energy and body weight regulation’.

Researchers suggest that the methanol in aspartame is a nerve toxin and once ingested by the body it’s broken to formic acid (another nerve toxin), and formaldehyde (a toxic chemical used to preserve dead bodies). Secret FDA documents show that aspartame can lead to birth defects and reproductive failure. 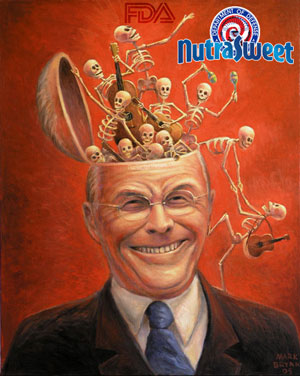 Studies suggest that artificial sweeteners can lead to gastrointestinal problems, nausea, and diarrhea. According to researchers, the artificial sweetener ‘sucralose’ could be the culprit of the increasing rate in inflammatory bowel disease. Researchers suggest that similar to saccharin, sucralose can exert potent inhibition of gut bacteria and lead to gastrointestinal problems.

According to researchers, ‘sucralose could be the cause in increase of IBD in Canada. In 1991, Canada was the first country to approve the use of sucralose, and it was allowed to be used as a tabletop sweetener in breakfast cereals, beverages, desserts, toppings, fillings, chewing gum, breath mints, fruit spreads, salad dressings, confectionary, bakery products, processed fruits and vegetables, alcoholic beverages, puddings and table syrups’.

According to researchers, sweeteners such as aspartame, acesulfame-K, and saccharin have carcinogenic effects and could damage DNA. Consuming aspartame could result in allergies, asthma, and hair loss.

With the alarming health risks associated with artificial sweeteners, why FDA, members of congress, and our so called politicians do absolutely ‘NOTHING’ about aspartame?

Back in 1979, FDA suggested that the preliminary results about toxicity of aspartame were so alarming that it couldn’t be used in NutraSweet products.  In fact, in 1980, FDA banned the use of aspartame after 3 independent scientists studied the sweetener. The scientists suggested that heat exposure will turn aspartame into cancer-causing carcinogen and it should be banned for baking. They also linked aspartame to brain damage, neurological toxicity, and cancer.

However when Ronald Reagan became president, him and Donald Rumsfeld (the former Secretary of Defense) assigned Arthur Hayes Hull, Jr., as the commissioner of FDA. Arthur Hayes Hull approved aspartame without any concern about the original documents of FDA regarding the toxicity of aspartame. Keep in mind that Donald Rumsfeld was the chief executive of the pharmaceutical giant G D Searle & Company, the producer of aspartame and NutraSweet at that time. NutraSweet made nearly half of Searle profit and was later on sold to the giant biotech company, Monsanto. Donald Rumsfeld was also in charge of Pentagon under Gerald Ford in 1975 and George Bush in 2000. It was Donald Rumsfeld, the secretary of defense after 9/11 who authorized torture, CIA rendition program, secret detention and coercive interrogation program.