The giant agrichemical company Monsanto promised that GMOs will reduce the use of pesticides and herbicides in the global agriculture. However, the reality cannot be any further from the truth, since glyphosate (the active ingredient in popular weedkiller Roundup) has become one of the heavily used chemicals in the world.

Roundup was originally designed to kill weeds, bugs and pests but since nature will always find a way, more than half of the farms in US are now dealing with superweeds and superpests that are becoming resistant to Monsanto’s Roundup.

Thanks to Monsanto’s popular herbicide, glyphosate is now everywhere even in the air we breathe, the water we drink or the soil we use. In fact, researchers have detected alarming levels of glyphosate in people’s urine, breast milk of mothers across US, or the rain water. According to researchers, the water in US has about 7,000 more glyphosate than the allowable limit for animal organ damage.

Glyphosate is linked to a wide range of cancers from breast cancer to lymph or skin cancer and leukemia:

A recent research published in the journal of Food and Chemical Toxicolog indicates that glyphosate can fuel the growth of cancer cells and increase the chances of breast cancer in women.

According to a recent research by Dr Anthony Samsel and Dr Stephanie Seneff from the Massachusetts Institute of Technology (MIT), for more than four decades Monsanto has been hiding studies that link glyphosate to cancer.

Another research published in the International Journal of Environmental Research and Public Health, links glyphosate to cancer of lymph tissue.

According to another research by the Indian Institute of Toxicology, glyphosate can fuel and enhance the growth of cancer cells. Another study published in the Journal of Hematology & Thromboembolic Diseases suggests that GMO foods can enhance the risk of blood abnormalities and cancer known as anemia and leukemia.

Glyphosate is linked to deformities, death and birth defect: 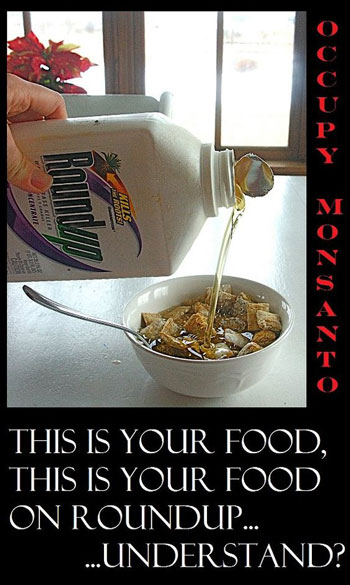 Glyphosate is to be blamed for the recent horrifying animal mutation in Argentina.  Earlier in May, the DailyMail published horrific pictures of animal deformities in farm animals in Argentina.

If one doesn’t know, they would assume these are images from a horror movie made by Hollywood; an image of a goat with two heads, or a skinless pig puppy born with a trunk, or eight legged pig. Keep in mind that Argentina is one of the largest users of agrochemicals like glyphosate in the world. Farmers in Argentina have been blaming the deformities in farm animals on glyphosate.

Keep in mind that few years ago, a study published by Chemical research in Toxicology indicated that glyphosate causes malformations in frog and chicken embryos. Soon after the study back in 2009, the environmental groups in Argentina pushed the ban on the use of glyphosate but failed to fight the biotech lobby.

There have been many other cases of deformities and even death in farm animals because of glyphosate. In fact, a few years ago, Danish farmers reported that the livestock fed on Monsanto’s genetically modified soy (treated with Roundup) suffered from various health issues such as stomach ulcers, bloating, deformities, and abnormal growth. In Germany and many other parts of the world, cows fed on GMOs suddenly died from mysterious diseases. Keep in mind that genetically modified soy has been linked a wide range of illnesses and deformation in farm pigs.

According to a study published in the International Journal of Environmental Research and Public Health, glyphosate becomes extremely toxic when mixed with ‘hard water’ or other heavy metals such as arsenic and cadmium. Heavy metals like arsenic and cadmium naturally exists in the soil or commercial fertilizers. The researchers have linked glyphosate to fatal kidney disease (CKDu) in Sri Lank and in El Salvador. Keep in mind that Fatal Chronic Kidney Disease (CKDu) is the second leading cause of death among males in these countries.

According to a research published by the Environmental health, glyphosate-based herbicides are endocrine disruptors and are deadly to liver cells. Another study published in the Journal of Organic System links severe stomach inflammation in farm pigs to GMOs.

Other studies have also shown that glyphosate is linked to inflammatory bowel disease, liver damage and kidney disease. In US, we have a growing epidemic of gastrointestinal problem, and according to researchers from the University Hospitals Case Medical Center (UH), in America, inflammatory bowel disease in children is linked to GMOs and biotech chemicals including Roundup Ready.

Glyphosate is linked to infertility:

The rate of infertility is increasing drastically and there are more than 60 to 80 million couples who are having a hard time conceiving a child. According to a research published by National Institute of Health, glyphosate in Roundup does significantly affect the reproductive system of male rats in a negative way.

Another study published in Science Direct shows that agrichemicals including glyphosate are largely contributing to male infertility.

According to Jeffrey Smith (the Consumer Advocate and Author of Seeds of Deception), “After feeding hamsters for two years over three generations, those on the GM diet, and especially the group on the maximum GM soy diet, showed devastating results. By the third generation, most GM soy-fed hamsters lost the ability to have babies. They also suffered slower growth, and a high mortality rate among the pups”.

Glyphosate is linked to DNA damage:

In a recent study published by the Public Library of Science (PLOS), researchers found out that the gene of genetically modified foods can enter human blood and change human’s DNA.

Glyphosate is linked to autism:

Currently, in the US, one in 68 kids is born with autism but according to researchers, this number is going to increase drastically within the next few years.  The researchers at MIT suggest that the biotech herbicide glyphosate will cause autism in 50% of children by 2025.

According to the leading author of the study, Dr. Seneff “At today’s rate, by 2025, one in two children will be autistic and the side effects of autism closely mimic those of glyphosate toxicity”. Dr. Seneff also presented data showing a remarkably consistent correlation between the use of Roundup on crops (and the creation of Roundup-ready GMO crop seeds) with rising rates of autism in children.

Another study shows that children of pregnant women who live close by farms sprayed with agrochemicals have an increased 60% chance of developing autism.

Glyphosate is linked to Parkinson’s disease:

A recent research indicates that glyphosate is linked a wide range of diseases including anxiety, Parkinson's disease (PD), and prion diseases.

Another study published by the scientific journal Entropy indicates that glyphosate could cause a wide range of diseases such as Parkinson’s, infertility and cancers.

Another research published in the journal Neurotoxicology and Teratology suggests that glyphosate induces cell death, with frightening repercussions. The researchers link glyphosate to nervous system disorder such as Parkinson's disease.