Obesity is a growing epidemic in the United States affecting more than two thirds of the adults. Almost one in three kids and two in three adults in US are considered to be obese or overweight.  While the human gene and DNA hasn’t changed much in the last 50 years, our food supply and lifestyle habits have changed drastically. Childhood obesity is a growing epidemic and children from low income families are more prone to obesity and other health issues such as diabetes and cardiovascular disease.

Keep in mind that statistics show that more than 80% of pre-school kids don’t get recommended dietary fiber and 68% of school kids don’t also get enough omega 3 fatty acids vital for health and brain development.

In addition to nutritional deficiencies, the increase in chemicals, pesticides, plastic pollutant, hormones and antibiotics in our food supply can contribute to weight gain and obesity.

Most of pesticides used in our food supply are endocrine disruptors and can contribute to obesity and weight gain. The other chemical that affects the body’s metabolism and hormonal system are obesogens linked to obesity, diabetes, heart disease and cardiovascular disease. With the exception of organic foods, most foods that Americans consume are filled with tons of chemicals, pesticides, plastic pollutants and other toxins.

Here are the top 10 chemicals linked to obesity and weigh gain:

On an average Americans are exposed to over 13 different pesticides that are endocrine disruptors. Researchers suggest that endocrine disruptors are linked to obesity and weight gain. “A substantial body of evidence suggests that a subclass of endocrine-disrupting chemicals (EDCs), which interfere with endocrine signaling, can disrupt hormonally regulated metabolic processes, especially if exposure occurs during early development. These chemicals, so-called 'obesogens' might predispose some individuals to gain weight despite their efforts to limit caloric intake and increase levels of physical activity” say researchers.

Other endocrine disruptors are dioxins found in herbicide Agent Orange (used in second generation of GMOs), PCBs, and insecticide DDT. According to Endocrine Society "Endocrine-disrupting chemicals contribute to health problems by mimicking, blocking or otherwise interfering with the body's natural hormones. By hijacking the body's chemical messengers, endocrine-disrupting chemicals can alter the way cells develop and grow".

2. Other endocrine disruptors such as Obesogens (found in pesticides and PCBs) and Atrazine (found in herbicides)

Obesogens known as endocrine disruptors can interfere with function of the body’s hormonal system.  Obesogens interfere with the endocrine system in our body that regulates our metabolism, growth and brain development. Many non organic food products such as peaches, apples, nectarines, bell peppers, grapes, tomatoes, carrots, pears, cherries, kale, lettuce and celery are covered with obesogens. According to researchers, obesogens are environmental pollutants linked to obesity and weigh gain.

Atrazine widely used in herbicides is endocrine disruptor and according to researchers, atrazine can lead to low metabolic rate and increase in risk of obesity. Researchers also link atrazine to birth defect, and infertility.

According to researchers, the use of growth hormones in livestock including cows or chickens and farmed fish is linked to the obesity epidemic. Keep in mind that many cows in factory farms are routinely injected with bovine growth hormones for increase in meat and milk production. rBGH/rBST hormones are linked to early puberty and breast/prostate cancer.

Cows regularly treated with growth hormones get painful udder infection and are routinely injected with antibiotics. Statistics show that more than 86% of seafood in the US is imported from countries like Vietnam or China. Keep in mind that most factory farms in Asia heavily use antibiotics in raising farmed fish or shrimp. In fact, a report by ABC news shows that most imported shrimps have high levels of dangerous antibiotics that are illegal in US.

According to a report by alternet on ‘Why America's Favorite Seafood Is a Health and Environmental Nightmare’, the writer talks about Taras Grescoe’s book on How to Eat Ethically in a World of Vanishing Seafood. “The shrimp pond preparation begins with urea, superphosphate, and diesel, then progresses to the use of piscicides (fish-killing chemicals like chlorine and rotenone), pesticides and antibiotics (including some that are banned in the U.S.), and ends by treating the shrimp with sodium tripolyphosphate (a suspected neurotoxicant), Borax, and occasionally caustic soda” Taras Grescoe writes.

Keep in mind that farmed raised salmon has 10 times more pollution and PCB’s than wild salmon. Farmed salmon are also fed on pellets made from GMO corn/soy or feces of turkey and chickens. The use of antibiotics and obesogen in farmed raised salmon makes the color of salmon white and not pink. To give salmon a desirable and healthy pink color, famers use pellets made from pink dyes.

5. GMO corn and soy (found in thousands of consumer products and livestock grazed on GMO corn/soy) 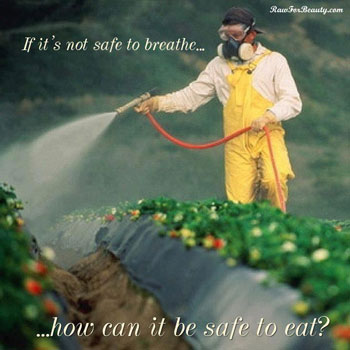 According to researchers from Norway, rats fed on a diet high in genetically modified corn and soy got fatter a lot faster. Professor Ashild Krogdahl writes “The results show a positive link between GE corn and obesity. Animals fed a GE corn diet got fatter quicker and retained the weight compared to animals fed a non-GE grain diet. The studies were performed on rats, mice, pigs and salmon, achieving the same results”.

Keep in mind that BT toxin found in GMO corn exists in blood and urine of 93% of women and their unborn fetuses. BT toxin in GMO corn has been linked to the epidemic of gastrointestinal problems and leaky gut. BT toxin breaks the stomach of insects with just one bite and it can damage the intestinal walls of infants and newborns.

Statistics show that more than 93% of Americans have phthalates and BPA detected in their blood. Every year, more than a billion pounds of BPA and phthalates are manufactured globally. BPA is commonly used on coating of canned foods, pesticides, sports drinks, and bottled drinks.

According to Researchers, “when we compared levels of BPA in the urine of almost 1,000 women in US to their self-reported weight gain over a 10-year period, we found out that the women with the highest levels of BPA reported gaining about half a pound more per year than women with the lowest levels”. Other research also shows that BPA could “accelerate fat-cell differentiation, disrupt pancreatic functioning, and cause insulin resistance, all of which can lead to obesity”.

7. Additives and preservatives found in processed foods (such as Emulsifiers and MSG)

Since food has no longer taste or flavor, most processed foods are filled with additives, preservatives, and chemicals such as emulsifiers or MSG. According to researchers, emulsifiers can cause weight gain and obesity in lab rats and lead to gut diseases such as colitis. Colitis is the inflammation of the intestinal wall and can cause abdominal pain and diarrhea.

Studies also show that the flavor enhancer monosodium glutamate (MSG) is lined to obesity and weight gain in lab rats. Researchers suggest that that MSG plays a key role in the onset of obesity and non-alcoholic fatty liver.

8. PFOA or chemical C8 (found in nonstick or Teflon cookware)

According to researchers, chemical C8 or PFOA in nonstick cookware like Teflon is linked to weight gain and obesity. “When Danish researchers measured levels of PFOA in pregnant mothers and then compared those with their children's body weights 20 years later, the moms who'd had the highest levels of the chemical in their blood were three times as likely to have overweight or obese daughters than mothers with the lowest levels”. (Source)

Early exposure to chemical C8 or PFOA in animal studies has also been linked to obesity later in life. Studies have shown that exposure to PFOA can significantly weaken the immune system and the body’s ability to fight infections and pathogens. Keep in mind that residents of Virginia and Ohio (where DuPont, the manufacture of Teflon had its first PFOA manufacturing plant) have higher levels of cholesterol and suffer from liver damages and heart disease.

Keep in mind that artificial sweeteners are linked to many other health issues such as diabetes, cardiovascular disease, leukemia, gastrointestinal problems and allergies.

Heavy metals are found in thousands of consumer products and foods. Keep in mind that farmed salmon and high fructose corn syrup have high levels of mercury in them. Most rice and rice products have high levels of arsenic. Accumulation of these heavy metals and free radicals can lead to weight gain, obesity and many other chronic diseases such as cancer. Mercury, lead and arsenic can also down your metabolic rate and use the body cells as fat storage.

Thousands of food products such as dairy, ice cream, bread, soups, canned foods, processed meats, sodas, salad dressings, catch up and pancake syrups have high fructose corn syrup (HFCS) in them. Research shows that HFCS is linked to obesity and weight gain. According to researchers, “the long-term effects of HFCS on body weight and obesogenic parameters, as well as gender differences, were explored. Over the course of 6 or 7 months, both male and female rats with access to HFCS gained significantly more body weight than control groups. This increase in body weight with HFCS was accompanied by an increase in adipose fat, notably in the abdominal region, and elevated circulating triglyceride levels. Translated to humans, these results suggest that excessive consumption of HFCS may contribute to the incidence of obesity”.