Cooking in Teflon and non-stick cookware has become increasingly popular despite the health risks associated with them. DuPont is the third largest producer of chemicals after ExxonMobil and Dow. The chemical used in Teflon known as perfluorooctanoic acid (PFOA)-(PFCs) or C8 is known to be a carcinogen. Over the years, chemical C8 has found its way into our air, water and food supply.

Although there have been many lawsuits against DuPont for the health risks associated with Teflon, DuPont has been able to pay off the injured parties and hide the serious health risks linked to chemical C8. 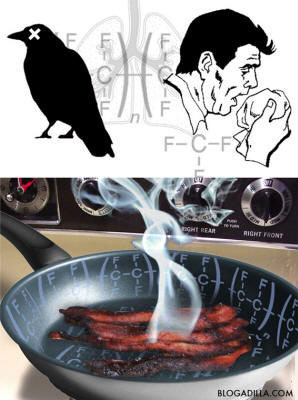 About ten years ago, the Environmental Protection Agency (EPA) sued DuPont for $16.5 million because of hiding side effects of PFOA. Since then EPA has been trying to ban the chemical C8, however, DuPont lobbyists have been able to pay millions of dollars in financial penalties and get away with banning the chemical.

Here are the top 5 health risks associated with chemical C8:

Studies suggest that exposure to chemical PFOA can weaken the immune system and the body’s ability to fight infections and diseases. According to researchers, high level of PFOA in people is linked to low level of a protein that helps to fight viruses, pathogens, and bacteria.

Thyroid disease is very common is those who are exposed to high levels of PFOA. According to the British researchers from the University of Exeter and the Peninsula Medical School, people exposed to chemicals PFOA and PFOS are twice more likely to develop thyroid diseases or cancer.  Other research has also shown that chemical C8 can affect the function of the thyroid hormone system and lead to colitis.

According to researchers at UCLA, women with higher level of PFCs in their blood have an increased 50% chance of infertility. In another research by Human Reproduction, researchers suggested that higher levels of both PFOA and PFOS are linked to reproductive issues and longer wait time for getting pregnant.

High levels of PFOA in children can lead to weight gain, high level of cholesterol, and increased risk in heart disease researchers say. The early exposure of lab rats to chemical PFOA have resulted in obesity later in life.

5. Organ damage such as liver issues

West Virginia and Ohio residents (where DuPont had its first manufacturing plants) suffer from a wide range of health issues such as organ damage, liver toxicity, hypertension and pre-eclampsia. According to researchers, in lab animals exposure to C8 increases the risk of growth of cancer cells in mammary glands (breasts), testicles, liver, and pancreas. In human studies, researchers suggest that increased level of PFOA in the body can trigger the growth of cancer cells and lead to testicular cancer, kidney cancer and thyroid cancer.

How to avoid your exposure to toxic chemicals such as chemical C8:

>> Avoid all non-stick cookware and instead use glass, iron, stainless steel, or copper pans and pots


>> Buy natural personal care products (such as toothpastes, shampoo, or deodorants) that are free of toxins and chemicals

Find out how to cook your meal in a healthy way: Top 5 recommendations for making a healthy meal for yourself and your loved ones